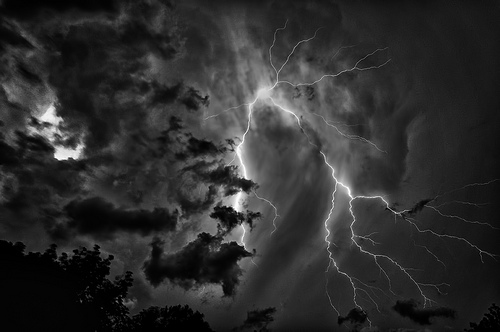 A light in the darkness: This brilliant photo was sourced from gleasonmj's Flickr photostream

The Belgrave Club in Halifax was the scene for the traditional curtain closer on the Calderdale Chess League season as players gathered for the annual Team Lightning Competition. Those readers who are uninitiated in this fun and frenetic format should have a quick look at my post on last year’s competition which was won by Hebden Bridge ‘A’.

Hebden were probably one of the pre-tournament favourites for this year’s competition too but, on the night, they found that the strength of their own line up and the club’s representation in general was somewhat under par. Only 8 Hebden Bridge players made it to the event when last year the club fielded 3 teams of 5! This meant that, once the first team line-up had been confirmed, Danny Crampton, Terry Sullivan and Ray Deraverere had to be loaned out to other clubs who were lacking full line-ups.

As it transpired there were only 7 teams entered in total so the turn out was generally a little disappointing. However, on the plus side, several teams had taken the competition seriously enough to put out very strong line ups and that ensured the action was extremely competitive. Todmorden ‘A’ for example, arrived with most of their regular (and very strong) line up from the League 1 campaign which saw them pipped at the post by Hebden Bridge in the very last match of the season.

Halifax were bolstered by the return of Darwin Ursal to board 1 following his season long ‘loan’ to Hebden and they also fielded Will Somerset on board 2. Both these two are graded over 180! Huddersfield had also arrived with a strong side led by another +175 graded player, Mitchell Burke. Finally, Hebden Bridge themselves had covered for Darwin’s departure by drafting in yet another super-strong player of their own, Matthew Webb.

Unfortunately for Hebden, without Matthew Parsons on board 2 and Pete Leonard on board 3, they were weaker down the order than they would ideally have liked. Nevertheless, in such illustrious company they performed creditably and came pretty close to defending the title they have held for the last two seasons.

The critical round of the tournament for Hebden Bridge on the night was round 5. Having squeezed a close 3-2 win against the old foe Huddersfield in round 1 and lost by a similarly tight scoreline against Halifax in round 2, Hebden had launched themselves right back into the competition by scoring 4½ against Belgrave and a perfect 5 against Todmorden ‘B’. In round 5 they lined up against the leaders Todmorden ‘A’ who were merely a point ahead them. If they could beat the strongest team in the competition then they had a chance to lift the title once again.

The match started badly when Dave Shapland got mauled on the Black side of a King’s Gambit essayed by Pete Mulleady. Then things started to look up. On board 5 Martin Syrett put away Chris Edwards and on board 1 Matthew Webb demonstrated great technique in the endgame by grinding out a win against Martin Hamer. Hebden were a point up with two to play and on board 3 Nick Sykes seemed to have at least a draw in hand against Alastair Wright.

Then it all went pear-shaped. On board 4 Josh Blinkhorn managed to secure a winning advantage in a complex rook and pawn ending against Neil Suttie. However, when you only have 10 seconds to think about each move blundering away a winning advantage is always a possibility and sadly, on this occasion, Josh wias the victim, rather than the perpetrator, of a swindle. This left the scores level, and Nick Sykes now had to press for a win in a position that didn’t merit such aggression. Gamely he tried but it backfired and Alastair was able to win to secure a 3-2 win for Todmorden.

In the final round Hebden defeated Brighouse 4-1 to finish with 20 game points. This was enough to see them finish half a point ahead of Huddersfield and level on points with Halifax. Todmorden were the winners with 23 points. Here are the full scores for all the teams:

Congratulations to Todmorden for their excellent team performance. They won every match they played and were not recipients of a 5-0 bye as many other teams were.

The individual medals were awarded as follows:

Special mention should be made of both Martin Syrett’s excellent display and also of yet another magnificent performance from Darwin Ursal who tore colossally strong opposition limb from limb as he dispatched, Mitchell Burke, Matthew Webb and Martin Hamer (!) on his way to a perfect score.

With strength like this being displayed by the clubs for the team lightning, the future prospects for 2012-13 league season must be very bright indeed!

One Response to “Lightning Illuminates a Bright Future”