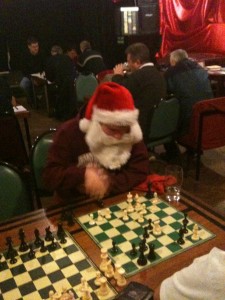 The secret to Dan's success? He likes to get himself into character before each game

First of all, “Happy New Year” to all our members and readers!

As we have reached the half way point in the league season I thought it might be interesting to publish Hebden Bridge Chess Club player’s current live grades. Below are their Yorkshire Chess Association grades which are up to date to the end of December. The numbers in brackets indicte the variance on the players’ last annual grade published in May 2011. Players are listed based on the teams they have represented most frequently so far and roughly in board order:

Congratulations to ‘D’ team Captain, Danny Crampton, who has seen his live grade rise by 12 points since the start of the season. Nick Sykes and Neil Bamford have also made significant ground as well as having made valuable contributions to their teams’ success in the league thus far.

Danny also makes a selfless and significant contribution to the club in working with John Kerrane to coach our juniors. In honour of Mr Crampton’s moment in the sun below are two of his recent efforts. In the game viewer you will find is his last win in the league and also a marginally less taxing training game played against one of his young charges to whom I promised to publish the game on these pages: