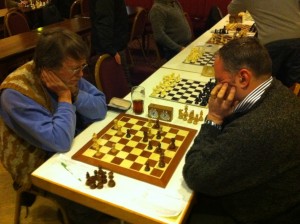 Pete Leonard (left) now has a 100% record with his new chess set!

On Monday night the competitors taking part in this season’s Calderdale Individual Chess Championship gathered at the Belgrave Social Club in Halifax to do battle in round 3. At the end of an interesting and exciting evening just three players had managed to preserve a 100% record.

Without doubt the story of the round was Pete Leonard’s victory over last year’s winner and top seed, John Morgan. The night started auspisciously for Pete when he arrived at the club to find he had won this website’s Christmas Quiz. His prize was a beautiful wooden chess set donated by www.chesssets.co.uk and the organisers has set up the board and pieces for him to christen that night.

Pete chose to inaugurated his new toy by playing 1.e4 and John responded by deploying the Pirc Defence, varying from his favourite St. George’s opening (1…a6) which he utilised to defeat Josh Blinkhorn with in round 1. It seems that John may not have responded to Pete’s strategic plan in the very best way. Usually when White advances in the centre with e5 Black will respond to the challenge directly by playing c5 rather than the c6 and b5 advance that Morgan selected.

In itself this was not a critical factor as John succeeded in gaining space on the queen’s side to counter Pete’s extra space in the centre. But Pete successfully stabilised the situation there and made the most of the hole John had left for him on c5 by establishing a knight on the square.

Pete managed to maintain the initiative throughout the middle game and when all the pieces except the rooks had been removed from the board both players had passed pawns but, crucially, Pete’s was further from the enemy king and further advanced up the board. A complicated double rook ending ensued but Pete maintained control of the situation admirably and in the end his passed b-pawn decided matters. No doubt John will be disappointed to have lost the game but he didn’t appear to have played the game too badly and Pete had a very good day at the office. Congratulations go to him for taking down one of the hardest players to beat in Calderdale.

Huddersfield’s number one, Mitchell Burke, dealt with Pete Hughes very efficiently. He gained a positional advantage utilising the Grand Prix Attack against Pete’s Sicilian Defence and, although it might appear that Pete resigned the game a bit early, it must be said that being a pawn down and with very few prospects of counter play against a player of Mitchell’s calibre, the future looked fairly miserable.

Probably the most exciting pyrotechnic game of the evening took place on board three where Darwin Ursal played in thematic and classical fashion to comprehensively take apart Robert Clegg. I’m no expert on the King’s Indian Defence and I’m not familiar with all the ideas but it appears that Robert must have gone astray at some stage late in the opening because Darwin’s pawn storm in the king’s side seemed unstoppable. Perhaps a move like 12.f3 would have held up Darwin’s momentum a little.

Another surprising result was unfolding on board 4 where Hebden Bridge’s Dave Shapland was taking on Halifax’s John Aldridge. Despite giving away more than 50 rating points to Dave, John played extremely well and defended resourcefully and tenaciously right until the end of the night to gain a highly creditable draw. At several points in the game Dave appeared to have gained the upper hand but despite winning the exchange for a pawn, there wasn’t enough material left on the board for him to be able to take advantage and in the end it was John who was playing for a win. Finally, Dave gave back the exchange to remove John’s last remaining pawn leaving just bare kings and a minor piece each.

It was a night for Sicilian Defences it would seem. Pete Hughes and John Aldridge both deployed it and so too did Robert Sutcliffe, Adrian Dawson and Tom Webster. Whilst the first two players did not succeed in winning their games the last three did and Adrian over came a higher rated opponent in the form of Martin Syrett.

All the games from the night’s play are available to play through in the viewer below and also to download here.

Round 4 takes place on the 13th of February and the competition is wonderfully poised with Darwin and Pete flying the flag for Hebden Bridge and Mitchell, now the leading highest seed with a perfect score. These three will be joined on the top two boards by Dave Shapland who, despite his draw is still very much in touch and is the only player on 2½.  A large group of players are on 2 points and, should the top two boards both end in draws (not that unlikely a scenario) then the final round could be tremendously competitive.