Fixtures from the second round of the inaugural Bridestones Holme Brew Chess Challenge took place at the Trades Club on Monday the 20th and 27th of May. Already the competition has begun to take the shape most of the particpant’s expected as top seed Matthew Parsons maintained a 100% record by beating Pete Leonard whilst Alastair Wright and Dave Shapland and Nick Sykes and Andy Leatherbarrow drew. It would appear that the competition for second place is already becoming the main point of interest as all the remaining competitors have now made a mark on the tournament cross table.

On current form it is hard to see anyone managing to do more than draw with Matthew and even that would be some achievement. He is a level up from everyone else. Playing a second consecutive game with White, Matthew this time abstained from playing the London System in favour of the Kings Indian Attack (1.Nf3, 2.d3, 3.g3 and 4.Bg2). He said he did this because he didn’t think Pete, a 1.e4 player down to his boots, would be familiar with all the ideas in the Kings Indian. Perhaps so but he may have forgotten that Pete himself employs the KIA set-up against the French Defence so that might just be psychology on Matthew’s part. Frankly it doesn’t really matter what openings he plays with White (unless he elects to take opponents on in their own theoretical territory which would be perverse in the extreme) because his middle game play is almost always superior enough to enable him to win from equal or even moderately worse opening positions. 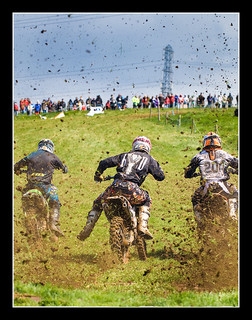 No-one has been left on the start line as all 6 competitors have now opened their accounts. This image is used under Creative Commons terms and sourced from jon-‘s Flickr photostream

However, let’s not get ahead of ourselves. Matthew’s opponents might well take some crumbs of comfort from this encounter with Pete because in fact he got less than nothing from the opening and Pete was bold enough to take the initiative and even dream of the advantage at one point. Matthew’s games are usually strategically complex and sometimes tactically but rarely does one get the impression that the tactics may take over the game. In this instance they did threaten to and, had Pete had the courage to grab the material that was available at the end of a long tactical sequence he might have caused his opponent some real problems. As it was the fleeting opportunity was missed and Matthew counter attacked hard. Suddenly all of the Kings Indian type ideas he mentioned in the post-mortem came to fruition as the pressure on Pete’s king began to build. In the end Pete lost a piece and was compelled to resign shortly afterwards. At least he won his first round match and so is on 50% for the competition so far.

The game between Nick Sykes and Andy Leatherbarrow was a completely different matter. As Andy said afterwards it was…

… a cagey affair with neither one of us wanting to get a game in the other one’s area of interest.

A strange opening ensued with plenty of manoeuvring and jockeying for position in the middle game. Nick had lost in round 1 and Andy was playing his first game in the competition and so it was understandable that neither wanted to take any risks to try and win the game. In the end neither made any mistakes and so a draw was inevitable.

That just left Alastair Wright and Dave Shapland to decide their game. As the lowest rated player in the competition Dave risks becoming a target for all the other players and so it was important that he, also playing his first game of the tournament, got off to a positive start to avoid any rot setting in from the outset. Alastair as another player who had lost in round 1 also had an interest in getting safely off the mark. As it was Dave, playing Black, did make some provocative moves (no surprises there!) in the opening which was a Vienna Gambit. Perhaps wary of Dave’s love for chaotic and wild positions Alastair refused to be drawn into a tactical melee and therefore missed a couple of critical chances to put his opponent under the most pressure.

The middle game was pretty much non-existent as Dave, taking his bat home after being refused his favourite toys, changed his mindset from “provocative” to “turgid”. He took his chance to exchange the queens early and play a long ending. For a while it seemed that Alastair had some good winning chances because Dave had put his remaining knight offside on a5 and appeared to be having trouble reactivating it. However, he used the opportunity afforded by a temporarily weak White d-pawn to open the centre, exchange off the rooks and then manoeuvre his knight just in time to maintain equality. The complex knight versus bishop ending still seemed to be in White’s favour (and indeed the computer finds a clear cut win for White) but a few more active moves secured Dave a hard earned draw.

Next week Dave has White against Nick and Andy has White against Matthew whilst Alastair takes a breather due to Pete’s absence for a holiday. An up to date cross-table of the results so far can be found on the Bridestones Holme Brew Chess Challenge page. All of the games from round 2 are in the viewer below and all are extensively annotated.

One Response to “… and they’re away!”