Last Monday’s third round games featured an outrageous miscarriage of chess justice and another smooth win for the top seed. An earlier version of this post featured an erroneous score for the game between Andy Leatherbarrow and Matthew Parsons which appeared to involve Matthew playing an awful combination and get away with it. As you’ll see from the comments to this post Andy played 27.Rfd1 and not 27.Rfc1 which meant that Matthew captured the rook rather than sacrificed the knight when he played 30… Nxd1+! This confused for your editor because 27… Qe6 still made sense even without the queen being threatened by the rook because it placed the White bishop under attack. Even more confusing was that the subsequent attack still almost worked aside from the fact that Andy ‘appeared’ to have missed a straightforward defence three moves in a row!

With Alastair Wright and Pete Leonard sitting out the action due to Pete’s holiday there were just two games being played, both of which were repeat encounters from this year’s Calderdale Individual Chess Championship. Matthew had beaten Andy Leatherbarrow with Black in round 3 and went on to win the title. Nick Sykes defeated Dave Shapland in round 4 and went on to finish in joint third place. Would the form books lead to repeat performances? 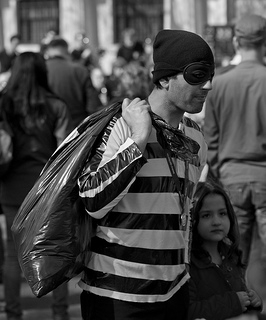 Were there one or two perpetrators? We must check that our evidence is correct. This image is used under Creative Commons terms and is sourced from f4niko’s Flickr photostream

Nick was playing Black in his game with Dave (in their match from the CIC the colours were reversed) and bravely elected to venture the Sicilian Defence with which had lost to Dave in their only encounter prior to this season. At first it appeared that a sneaky move order trick would enable Dave to get exactly the kind of tactical mess he so enjoys as Nick, caught off guard by 2.Nc3, suddenly found himself playing a Classical Sicilian instead of the Najdorf and Schevenigan systems he prefers. This meant that Dave was able to put the dangerous and monstrously complex Velimirovic Attack into play and the game looked poised for pyrotechnics. However, Nick adjusted well and decided to delay castling in favour of taking immediate counter measures on the queen’s-side. Dave misplayed the resultant position and was then on the back foot as Nick targeted a weak looking White king having already gone a pawn up.

Although he overlooked a couple of chances to bury Dave in the middle game, Nick maintained a pawn’s advantage into a rook and minor piece ending. However, matters were complicated by Dave’s passed a-pawn which advanced rapidly to occupy Nick’s pieces. It still should have been winning for Black but then Nick captured the White f-pawn with his bishop overlooking that it was protected by Dave’s rook and all his hard work was undone at a stroke. All that remained was for Dave to patiently coax home his advantage as Nick fumed in frustration across the board his pocket well and truly picked.

Andy had also played White in his game with Matthew earlier in the year. In that game Andy had chosen a very unorthodox opening and was summarily executed. This time he played ‘normally’ and tackled Matthew’s favorite Sniper system head on. All appeared to be going well for Andy who was holding his own quite comfortably until his error on move 28 allowing Matthew to uncork a winning knight manouevre immediately.

As a result of his larceny Dave significantly improved his standing in the tournament. Matthew increased his lead to a point and a half and now has three points whilst Dave moved into second on one and a half. The two  play each other in round 4 whilst Alastair is due to play Nick an Pete plays Andy. Below are both games with commentary. There is a cross table on the dedicated tournament page.

8 Responses to “Burglar makes a profit”