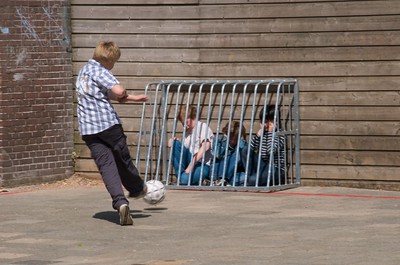 Take it from someone who’s played for title winning sides and relegated ones – sometimes playing chess in the Calderdale can feel a little bit like your bullying or being bullied by the opposition! Chess is a hard game. Last week it was Belgrave ‘B’s turn to take a pummeling. Next week, who knows? Photo: Thomas Ricker’s Flickr photostream

In today’s post we’ll catch up on Calderdale Evening League action from last week and this week and get ourselves back up to date with our reporting.

On Monday 11th of November, League 1 teams convened for their fifth round of fixtures this season. The leaders after round 4 were Halifax ‘A’ who’d taken advantage of Hebden Bridge ‘A’ drawing their home match against Huddersfield ‘A’ last time out to sneak ahead. Halifax were at home to the bottom team in the division Brighouse.

In a top versus bottom clash you’d expect the leaders to win fairly comfortably. However, Halifax defaulted their board 3 and thus found themselves playing catch up right from the off. The teams traded wins on the top two boards with Brighouse’s Robert Broadbent beating Richard Porter and Halifax’s Winston Williams (playing on board 2 for some strange reason) beating Nick Hudson. Sam Scurfield won for the hosts on board 5 and so the outcome of the match hinged on the game between Carlos Velosa and Tim Pryke. Despite there being nearly a 70-point rating advantage in Velosa’s favour, Pryke managed to hold a draw and so Halifax were only able to tie the match.

All of this was unknown across town at the Belgrave Club where Hebden Bridge ‘A’ and ‘B’ were visiting Belgrave ‘A’ and ‘B’ respectively. Wins for the visitors would see the ‘A’ team catch Halifax again and the ‘B’ team close the gap between themselves and top spot to one point.

Let’s start with the ‘B’ team’s match up. Hebden ‘B’ have been utterly consistent with the line up of their top four boards this season. Hamer, Cook, Clarkson and Swain have so far done them proud in being matched in only one fixture – the one against their ‘A’ team – so far this season. Duties on board 5 have rotated around somewhat with Richard Bedford, Pete Leonard, Paul Gledhill and for this match, John Kerrane, all taking turns.

Belgrave ‘B’ were out-rated by almost 30-points on every board but the bottom one where John Kerrane out-pointed Les Johnson by 7-points. The match turned out to be as one-sided as the ratings would have led speculators to predict. The ‘B’ team bullied their way to a 4½ – ½ victory with only Andrew Clarkson conceding a draw to Dave College. Here is the full match scorecard:

Bizarrely, Sam Swain played Chris Edwards for the second time in two matches as the two also faced each other on the same board when Belgrave ‘A’ visited Todmorden for their round 4 match. At least they played with opposite colours this time around! This was the ‘B’ team’s second win by such a convincing margin and they have the highest board count (14) of all the teams in the division after five rounds of play.

On the other side of the room at the Belgrave Social Club, Hebden Bridge ‘A’ were engaged in a mortal struggle with their hosts, Belgrave ‘A’. Both teams were back to full strength having fielded slightly weakened line ups in their last matches. Belgrave welcomed Tony Slinger back on board 3 and Malcolm Corbett on board 4. Hebden meanwhile saw Matthew Parsons, Stavros Pantazopoulos and Dave Shapland return to the fray having missed their last match. The two sides looked pretty evenly matched on the lower boards and so it looked like the outcome of the top two boards, where Hebden had larger rating advantages, would be critical.

All five games were very keenly contested. The first to finish was the board 4 encounter between Andy Leatherbarrow and Malcolm Corbett. Andy had chosen to meet Malcolm’s Alekhine’s Defence with the relatively modest but tense and strategically complex Voronezh System of the Exchange Variation. Often in this line, White gets a pleasant space advantage but, with thematic and well-rehearsed preparation, Black can find ways to fight for equality. That was pretty much what happened in this game. Malcolm broke out in the centre with 10…e5, Andy took the opportunity to gain space when he responded with 11.d5 but Malcolm countered by manouevring his knight with 11…Ne7 and 12….Nf5.

A few moves later Andy was able to secure a small but stable advantage when he exchanged knights on c5 and created a passed d-pawn. However, he didn’t find the right method to try and maintain his edge, allowed Malcom to create a passed pawn of his own on d4 and then, when both pairs of rooks came off it seemed clear that the position was pretty sterile, even with queens and a bishop pair each still on the board. In fact, my chess engine seems to think that White was slightly better when the draw was agreed but Andy was somewhat low on time and, with no other results certain in the match, made the right decision to maintain the balance of the score line.

The visitors took the lead in the next game to finish when Dave Shapland beat Tony Slinger on board 3. This game transposed from a Sicilian Defence into a pseudo Spanish or Italian Game due to a move order trick. Again, both players developed their strategies in thematic fashion. Dave transferred his knights to the king’s side and his queen to f3 in order to and try and occupy the f5 square and build a direct assault on the Black king while Tony looked to counter on the queen’s side by expanding with b5-a5-a4.

Dave was ready for Tony’s plan though and threw his bishop into h6. At this moment Tony selected the wrong defensive option and Dave was able to secure a winning positional advantage and an iron grip on the game with an unchallengeable knight on the f5 outpost. The Belgrave man wriggled on the hook for a few moves before giving up when the queens were exchanged at which point Dave was three pawns up.

Despite taking the lead in the match the overall situation was far from clear at this moment in proceedings. On board 5 Neil Suttie had lost a piece very early on against Karim Kahn, who essayed the rare and highly tactical Elephant Gambit! Neil had some compensation for the piece and the game was hugely unclear and complex but objectively, he was probably losing.

On board 2 Stavros Pantazopoulos took on Dave Patrick’s Slav Defence but seemed to be able to make no significant impact in the opening and Dave appeared to have at least neutralised the situation by the time the board 3 game was over. He might even have been slightly better.

Finally, on board 1, Matthew Parsons and John Morgan were locked into one of Matthew’s London Systems which John had met in enterprising fashion by playing 2…b5. At first it looked like Matthew would perform his usual trick of slowly outplaying his opponent using his superior knowledge and understanding of the resultant middle game position but on this occasion John fought back. First of all, he landed a blow that Matthew had completely overlooked and then he won an exchange when Matthew blundered in what was otherwise still an equal position. 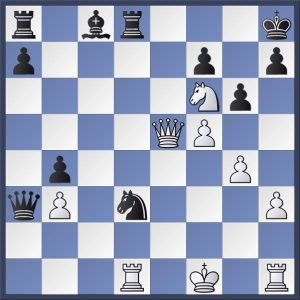 From Suttie vs. Khan in the Belgrave ‘A’ vs Hebden Bridge ‘A’ match. White to play. What would you do here? Solution in the game viewer at the end of this post

At this point in the evening two defeats and a draw looked like the likely outcome on the last three board for Hebden and that would see them lose the match. Thankfully, two of their three players were able to improve their situations. First, Neil fought back against Karim. He managed to win back his piece although it was at the expense of going two pawns down. It was a very hard game to both assess and play and both combatants got into pretty desperate time trouble as they approached time control. In the last few moves of the game Neil, in his haste, missed both a tough checkmate and then another clear winning line. Karim meanwhile rustled up enough activity to salvage a draw by perpetual check. It was probably a just result.

Sadly, no such justice was on offer for the stout resistance out up by Dave Patrick on board 2. He and Stavros reached an endgame in which they both had four pawns, a knight and a queen. Dave had a distant passed pawn on the b-file. In these types of position’s however, the initiative is crucial as a knight and a queen can be very dangerous indeed when working together. Stavros found a way to offer Dave a pawn in order to take the initiative. Dave misjudged the resultant position as both players time began to run out and Stavros forced a decisive attack home.

These two results meant that Hebden had already sealed match victory by the time John had, to his great credit, seen out a hard-earned victory over Matthew in the last game of the night to finish.

Your editor can’t remember the last time Hebden Bridge lost on top board for two matches in a row. Surely the run won’t continue and fortunately the results have not cost them too dearly as they rejoin Halifax at the top of the table on 7 points behind the leaders only by a single drawn board. However, Hebden Bridge’ B’ are now breathing down the necks of the leaders as they have 6 points and a better board count. Hebden Bridge ‘B’ play Halifax at home in their next match on Monday while Hebden Bridge ‘A’ host Belgrave ’B’. The title race is shaping up nicely.

This Monday night the four League 2 teams faced each other again with Hebden Bridge ‘C’ hosting the run-away leaders Huddersfield ‘B’ and Halifax ‘B’ hosting Belgrave C’.

Unfortunately, Hebden were unable to stop Huddersfield’s momentum and continue their recent run of good form as they went down heavily 1 – 4. Paul Gledhill and Chris Marsden were able to hold draws against players of similar ratings to their own, but John Alllan, John Kerrane and Terry Sullivan went down to David Gray, Granville Boot and Bryn Charlesworth respectively. Here is the final match scorecard:

In the other match to take place this week, Belgrave ‘C’ re-took sole possession of second place with a closely fought victory over Halifax ‘B’ at Halifax. Pete Moss managed to win for the hosts on board 2 but wins by Les Johnson over John Nicholson on board 3 and Paul Edwards over Barry Wadsworth on board 4 were enough to see the visitors to victory.

There are a few games from the Belgrave ‘A’ vs Hebden Bridge ‘A’ match in the game viewer below.