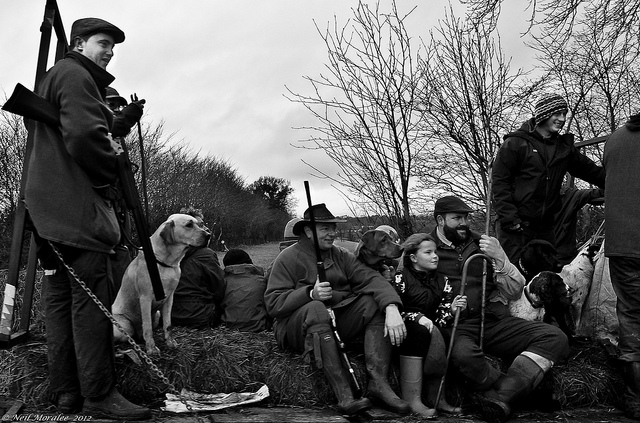 Reigning champions Halifax ‘A’ are ‘tooled up’ and back in the hunt for this year’s League 1 title after beating Hebden Bridge on Monday and seeing leaders Huddersfield go down on Wednesday. This image is used under Creative Commons terms and sourced from Neil Moralee’s Flickr photo stream

As the Calderdale League 1 season draws towards the half way mark the title race became a whole lot more interesting this week. The round 6 fixtures began on Monday night with Huddersfield sitting pretty at the top of the pile with a perfect score of ten match points from their first five matches. Todmorden ‘A’ were on two points behind them and reigning champions Halifax ‘A’ were two more points off the pace on just six points along with Hebden Bridge ‘A’.

However, by the end of Wednesday night, as Huddersfield were surprisingly beaten at home by Courier, the table had closed right up. In fact, Todmorden ‘A’ are now at the top of the heap on board score as they trounced Belgrave at home 4 — 1. Huddersfield are now in second and Halifax have put themselves right back into contention as they beat Hebden Bridge ‘A’ at home 4 — 1 and now lie just two points off the pace. Hebden and Courier are on six points each and still have an outside shot at the title as well.

The story of Hebden Bridge’s trip to Halifax on Monday night is full of interest. As expected, Halifax put together a very strong line up on the top three boards where the visitors were entertained by Winston Williams, Darwin Ursal and Bill Somerset. All of these players are rated over 180 whilst their opponents from Hebden Bridge were all in the 150’s. On the bottom two boards however the ratings between the two sides were much closer and so the pressure was on Hebden Bridge to score well here if they were to have any hopes of upsetting the applecart at the Lee Mount Club for a third successive year.

Sadly for Hebden lightning rarely strikes three times and this occasion was to be no different as, after hard fought encounters on all five boards, Halifax ran out comfortable winners. The first game to finish was the board 5 match up between Halifax’s captain, Carlos Velosa and Andy Leatherbarrow of Hebden Bridge.

The game began in fairly obscure fashion as Carlos employed his habitual opening move of 1.f4 but soon the game began to look a bit like a Closed Sicilian and Andy appeared to be doing quite well. Then came a pretty and amusing series of moves where both players offered and declined or were unable to accept pieces sacrifices. Carlos’s king seemed to be vulnerable at one moment but he found counter play by skewering Andy’s queen to a rook. Now it was Andy’s turn to seek compensation for the exchange but, just as he seemed to be building up pressure on Carlos’s king again the Halifax player found a precise series of checks that forced his capitulation. Carlos has very kindly sent us the game with some notes and it’s in the viewer at the end of this post.

Soon after it got even worse for Hebden as Martin Syrett lost to Scott Gornall on board 4. It looked like the kind of messy encounter Martin usually thrives on but on this occasion Scott coped with the complications better and Halifax had a 2 — 0 lead with their big guns still to finish.

The match could well have ended in a humbling whitewash for the visitors but they were rescued from that fate by their captain Pete Leonard who held Winston Williams to a draw fairly comfortably on board 1. In fact, as Pete points out in his notes to the game (which is in the viewer at the end of this post) he missed several good opportunities to play for a win and at the end it looked if anything like his position was for preference in a rook, knight and pawn ending.

Shortly after this game ended so did the game on board 3 where Nick Sykes debated the King’s Indian Defence with Bill Somerset. This was a heavyweight theoretical duel for Bill plays the King’s Indian with both colours and Nick has beaten some strong players with the opening himself. In the end Bill’s experience paid off as, although the honours in the opening phase were even, Bill slowly outplayed Nick in the middle game and managed to negotiate some acute time pressure to secure the win.

This just left the board two game between Darwin Ursal and Dave Shapland. The first surprise of this game was that Dave chose not to play his favourite Budapest Gambit (1.d4 Nf6 2.c4 e5!?) but instead opted for the Semi-Slav which is a more solid, yet still dynamic opening. He’d used this to reasonable effect in a previous game against Darwin but had lost in the end.

On this occasion Dave captalised on the relatively unambitious continuation chosen by Darwin that left him with no real opportunities to put Black under pressure. Darwin then felt compelled to resort to some murky but dubious complications but the gamble could have paid off for he missed one rather difficult opportunity to win an exchange and after that he was under pressure for much of the rest of the game.

Dave too missed a gilt-edged opportunity to hang on to an extra piece that Darwin felt he was going to regain after a tricky series of forcing moves and after that, although he was never in any danger of losing in the resulting rook and minor piece end game, Dave never had quite enough of an advantage to put the game away and had to settle for a draw.

As well as four of the games from this match, the game viewer below also contains Matthew Parsons draw on board 1 against Tony Slinger of Courier ‘A’. Courier have been something of a bÃªte noir for Huddersfield in the past and so it proved again on Wednesday as Huddersfield were without Messrs Keeley, Eagleton and Burke. Despite that they still had a strong enough side to beat their visitors but the board match ups were far more balanced than they would have been and in the end Courier’s Dave Patrick beat Dave Keddie on board 2 and Robert Clegg beat Dave Tooley on board 4 to give Courier a crucial win.

Remember that there is a League EGM at the Belgrave Social Club, Claremount Road, Halifax this Monday the 1st of December. This meeting has been held to propose and discuss possible changes to the league structure and so it’s very important that representatives from each club are present.

21 Responses to “Champions back in the hunt”