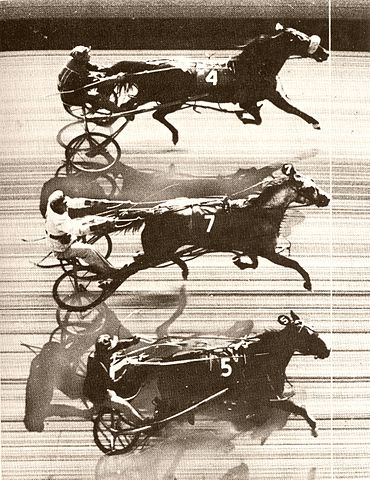 This race was even closer! A photo finish record of the first triple dead heat in harness racing: Patchover, Payne Hall and Penny Maid at Freehold Raceway (USA). Image sourced from Wikipedia

If there has ever been a closer finish in Calderdale Evening Chess League history then I hope someone can tell me about it! Hebden Bridge ‘A’, Todmorden ‘A’ and Huddersfield all finished within a point of each other as the season drew to a close this week.

On Monday night Hebden Bridge ‘A’ travelled to face Courier ‘A’ at the Belgrave club in Halifax. Also in action at the same venue against Belgrave were the reigning champions Huddersfield ‘A’ who still had a slim chance of retaining their title if Hebden Bridge lost and Todmorden failed to win. Mischievously, Huddersfield’s Captain, Robert Sutcliffe, had brought the league trophy with him expecting to hand it over to his Hebden Bridge counterpart at the end of the night. If only his counterpart had been so confident of success!

Hebden fielded their regular line up which has been strong enough to carry them through most of this season’s trials and tribulations. The question was, would they be able to over come the jitters that had affected their performance in the previous two matches? It took a while before any of the games began to crystalise into likely outcomes.

First to finish (unusually so this season) was Nick Sykes on board 5. He met Guy Thompson’s Colle System with solid, sensible development and challenged for the centre in a timely fashion. Then he made a tactical error and lost a pawn. For a little while it seemed that Black was in trouble but Nick played carefully and Guy was unable to make progress. Eventually, the pieces started to come off, Nick regained his pawn deficit and the players agreed to a draw.

Not long after that Hebden took a big step towards the title as Matthew Parsons forced Dave Patrick’s resignation. Once again Matthew’s weapon of choice was the Sniper, once again the game seemed murky and hard to understand, once again White seemed to have a decent position only to leave his forces uncoordinated and yet again Matthew finished his opponent in clinical style. The game is most instructive and can be followed in the viewer at the end of this post. Hebden were in front and needed a point and half from the last three games to secure the title.

That was when it all started to go wrong. Pete Leonard and Dave Shapland have both hit terrible form in perfect synchrony this season (they have scored 1 point between them across the last four rounds of the title race!) and there was always a chance that they would be unable to recover even though they were both outwardly confident.

Dave’s game against Dave Colledge on board 4 went astray quite early when he misplayed the move order of a complicated Semi-Slav Botvinnik variation and dropped a piece. As you’ll see in the note to his game below he could have refuted his opponent’s idea immediately but it was hard to spot. Despite this the position remained very difficult to assess and much careful calculation was needed by both players. Sadly, Mr Colledge was on top form and successfully navigated his way through a maze of hazards to get to an endgame where he had and extra bishop. Shapland forced him to play out the ending with commendable tenacity but Colledge saw the job to a close at the end of the evening.

Pete on the other hand seemed to fair well in the opening against Robert’s interesting opening choice — a Torre Attack. Then he lost his barings in the middle game and, in an unbalanced position Robert had the better of the affair. In the end Pete was down pawns and Robert had two bishops against Pete’s single rook. It was a hopeless cause and suddenly Courier were a point up with just one game to finish.

How fortunate that Hebden had this year’s hero, Darwin Ursal at the helm of this last game. John Morgan is a redoubtable opponent, especially with the White pieces, but Darwin has been unstoppable and he successfully conjured up complications in the endgame. This, compounded by John’s habitual zeintot was enough for Darwin to secure a last gasp win and Hebden had escaped with yet another draw, their fifth of the season.

Hebden ‘A’s  final match score card of the season looked like this:

I should add at this point that, like the true champions they have been, Huddersfield fought right to the end and inflicted a hefty 1 – 4 defeat on Belgrave to ensure that they did the very best they could to put pressure on both of the teams above them.

Right back at the beginning of the season, when Hebden travelled to Todmorden for the first round, I rhetorically asked whether that drawn match could be considered to be a point won or a point lost. I concluded that it would depend on how the rest of the season panned out. How true that prophecy turned out to be. If Hebden were to lose the title at the last gasp it would surely be because they had drawn too many matches despite losing only one.

So now all eyes were on Todmorden’s trip to Huddersfield ‘B’ on Thursday night. Of course they knew exactly what they had to do, only a total whitewash would give them enough to lift the title by one half point in the “game score” column. That would surely put every player in their team under greater pressure. No team had managed a 5-0 result all season. Could Todmorden over turn the odds and be the first at the last?

The four East Lancs mercenaries drove over to Huddersfield knowing exactly what was required of them…..win…..on EVERY board. On the way we discussed our possible opponents and game strategy; take no risks, accumulate small advantages, pounce and exploit any weaknesses, but above all stay calm! Once at the venue we met Chris Edwards the Todmorden captain who had not shirked the pressure and selected himself for board 5. Huddersfield had a new player on board 1, H.Zeglam who was an unknown quantity to us but was highly praised by their captain Robert Sutcliffe. However, we were encouraged by our large grading advantage on all the boards ranging from 60 to 20 ECF points in our favour, and we certainly were not lacking in confidence at 7:30 p.m.

My opponent on board 3 was Eddy Mellor a completely new face to me and at 117 was just the sort of opponent I wanted on a night like this. Robert Sutcliffe had introduced him with a word of caution though as he had apparently beaten a very strong player recently. Not tonight I thought. 1.d4… great lets have a main line Grunfeld. Sadly not. Eddy calmly set up a Colle System against my fianchettoed Bishop with pawns on e3, d4, and c3. It was going to be a long grind and I concentrated on my game looking for the slightest chink in White’s play.

I was vaguely aware that White had thrown the kitchen sink at Martyn Hamer on board 1, and that Martyn had been forced to defend perfectly. On board 2 we had been forced to allow White the win of the exchange for us to make headway. I could not spare a second glance at boards 4 and 5 as Eddy Mellor was not giving me the slightest weakness to aim at and I was behind on the clock. Rybka makes not one criticism or alternative suggestion to any of his moves up to the time control! So, I made my 36th move and the clocks went back 15 minutes to complete the game.

How often do we see an error at or immediately after the time control?  I was relieved to see Eddy’s 37th was his first slip, and one that I was able to convert with care 16 moves later making the match score 2-0 to Todmorden. I went out of the room with Rob Tokeley who had won on board 4 so he could put me in the picture with regards to the match. Rob was confident of wins on 1 and 2, but it was still in the balnace on 5. Then Martyn Hamer quickly joined us to make it 3-0, and I thought I could hear a fat lady singing just down the corridor.

The tension was too much so I went off to the bar. On my way back to watch the final moments of a great occasion I was met by Rob Tokeley who broke the news that Chris Edwards’ flag had fallen on his 35th move. It was no consolation that we then chalked up our fourth win of the evening on board 2 to finish the match at 4-1. Immediately we had to console Chris who we all felt for. The despair must have been awful for him, but the truth is you cannot point to that particular game on the last night of the season. Many points and half points swung both ways for Hebden Bridge and Todmorden from the very first week of the season, with every player in both teams being the benefactor and beneficiary of all sorts of outrageous fortune.

And so it was that Hebden Bridge ‘A’ took the title by the narrowest possible margin. Half a game point! Thanks to the “East Lancs mercenaries” for their generous congratulations and competitive spirit throughout the season. No doubt the fight will be just as intense next year. I’m already looking forward to it very much.