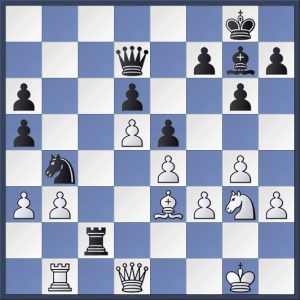 This position featured in a variation from the game Clarkson vs. Shapland in Hebden Bridge ‘A’s match with Todmorden ‘A’. Black (to move) seems to be in big trouble with his knight and rook attacked. Is there any hope for him? What’s the best move? Solution in the game viewer at the end of the post. This one’s tough and neither player saw it during the game.

As the third round of Calderdale League 1 matches got underway last Monday night there was one stand out fixture which promised to have a bearing on the destiny of the title this season. Hebden Bridge ‘A’ hosted back-to-back champions Todmorden ‘A’ at the Trades Club. Additionally, at the same venue Hebden Bridge ‘B’ played Huddersfield while at Lee Mount Halifax ‘B’ took on Belgrave ‘A’.

The scale of the task facing Hebden ‘A’ was daunting. With the rule change this season giving all away team players White this was essentially the equivalent of what would have been an away fixture in previous years and Todmorden have an outstanding record with the White pieces. The last time Todmorden ‘A’ lost with all playing White was the 2nd of February 2015 when they fielded an under-strength side against Brighouse and were punished with a 2-3 defeat. Since then they have won eight in a row and usually by a comfortable margin. They certainly haven’t lost with White when fielding their strongest available line up for a very long time. If ever.

With Todmorden having only played one match so far this season it was hard for Hebden to predict exactly who would appear for them and so they prepared themselves for the worst case scenario. When Messrs Hamer, Mulleady, Cook, Clarkson and Patrick all arrived at the Trades Club it was clear that the champions were prepared for a full-blooded battle.

Hebden themselves were at pretty much optimal strength. Matthew Parsons returned on board 1 having missed the last match against Huddersfield. Andy Back and Chris Bak were back-to-back (sorry!) on boards 2 and 3 while Captain Dave Shapland and Nick Sykes completed the line-up. The top boards were relatively evenly matched but Hebden gave away 10 rating points or more on the bottom two boards. The key questions were, could Dave and Nick get results out of their higher rated adversaries and, if not, could one of the top three for Hebden find a way to win one of their games.

Andy Bak and Pete Mulleady drew their game about half way through the evening with Pete having used quite a lot of his clock-time to ensure at least equality against an opponent who has a good personal score against him. Neither player would have been too unhappy with a draw. Not too long after this the top board was also drawn with Martin Hamer and Matthew Parsons transposing from an English Opening to a Maroczy Bind variation of the Accelerated Dragon. Again neither player would have been unhappy to sign peace terms in what was a well-played game between too strong players which reached the logical outcome.

At this stage the other three boards were all closely fought. Chris Bak seemed to have some structural weaknesses to contend with in another English Opening but in compensation his pieces appeared active and he was fighting hard for equality. On board 4 Dave Shapland seemed to neutralise the same opening system Andrew Clarkson had played against him last season but then, missing his best chance equalise he drifted into difficulties and seemed to be in a bit of trouble.

Finally, on board 5, Nick Sykes played the Sicilian Defence against Dave Patrick who essayed the 2.c3 variation. Nick has great knowledge of the Anti-Sicilian variations and eventually secured equality, though it seemed, with no real chances for more. Eventually, some time after time control had been reached, this game too was agreed drawn with both players having light-squared bishops and four pawns each. The position was sterile and there was nothing more to be done. This was a good result for Nick who has lost his last few games against Dave.

The final two games of the evening went right down to the wire and at the very end of the night’s play they both had dramatic twists in store for the players and kibitzers alike. On board 4 Andrew had waded into deep water against Dave. He’d advanced his queen into enemy territory which at first glance looked deadly but then he realised that his own king’s position was vulnerable to a counter-attack and had to stay calm and find two accurate moves to keep himself afloat. These cost him all of the 25-minute advantage he had on the clock and more. As both players reached the haven of move 36 they had only a minute or so left on the clock and would now have 15 more minutes each to fight out a complicated knight, bishop and pawns ending where Andrew seemed to have the only realistic chances of winning.

On board 3 Chris had patiently held his nerve to reach an endgame where he had a bishop and pawns against Phil’s knight and pawns. It seemed Chris had a notional advantage but in this game too both players had used much of their time to get to the time control and soon burnt up their extra 15 minutes trying to ensure they didn’t make a mess of the ending although Chris was now the one pressing or a win.

At this late stage in the evening spectators might have been sensible putting their money on five draws and a tied match. However, fate held a dramatic twist as Chris managed to win his end game with some fine technical play whilst in a desperate time scramble to give Hebden the lead.

The players on board 4 were completely unaware of this result as they were so short of time themselves they couldn’t get up or even look away from the board. Andrew was angling hard for a win but he had so little time left it seemed inevitable that Dave would draw the game and help Hebden win the match. Unfortunately for the home team Captain, he chose the wrong course and suddenly found himself facing two connected passed pawns and a knight with only a bishop to defend himself. Before he had chance to try and extricate himself he lost on time with Andrew’s flag also hanging by a thread. By that stage Dave’s position was lost anyway.

And so, the match was indeed tied and the exhausted players dragged themselves home. Hebden will probably be the happier of the two teams with that result but it could have been even better. The individual results were:

Looking on from the sidelines, Halifax ‘A’ (who had a bye this week) would probably have been delighted to see this result as they battle to regain the crown they lost two years ago. With two wins from their first two matches Halifax have the same points as Hebden Bridge ‘A’ with a game in hand whilst Tod ‘A’ have played the same number of matches but are a point behind.

This result also handed Huddersfield the opportunity to stake their claim as contenders to the crown. Having lost to Hebden ‘A’ last time out they needed to bounce back against Hebden Bridge ‘B’. They did just that and very conclusively as Martin Syrett’s team, missing a player, went down 0 — 5. All the games were hard fought but ultimately the higher rated Huddersfield team saw off their hosts conclusively. Individual scores were:

This put Huddersfield onto 4 match points along with Halifax ‘A’ and Hebden ‘A’, although they too have played a match more than Halifax and Todmorden. In round four Huddersfield will host Todmorden in a match that will provide them with an opportunity to establish their title credentials should they be able to get a result. It will be interesting to see how they get on. On the same evening Halifax ‘A’ return to action at Belgrave ‘A’ and Hebden Bridge ‘A’ play their third home fixture of the season against Halifax ‘B’ who beat them with the Black pieces last season.

Some of the games from the Hebden Bridge ‘A’ vs. Todmorden ‘A’ fixture can be replayed in the viewer below. Our thanks to Chris Bak, Andrew Clarkson and Nick Sykes for taking the time to annotate their games for us.