This week you lucky readers get a double dose of league 1 action as the last two weeks have been a hive of activity in this division and mark the half-way point in the season. It’s been a topsy-turvy couple of weeks for our title holders, Hebden Bridge ‘A’. 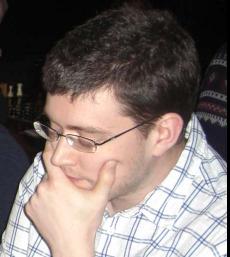 Matthew Parsons has been on sparkling form of late and contributed two crucial wins in the last two matches.

On Monday the 26th Dave Shapland’s team suffered a minor set back in their bid to retain the title as they slipped to a draw at Belgrave having led the match 0 — 2 at an early stage in the evening. On board 2 Matthew Parsons swept Malcolm Corbett aside in very short order and on board 4 the Captain worked hard to secure an endgame advantage against Angel Gonzalez and then saw his adversary blunder a piece almost immediately after the queens came off the board.

At this point in the evening it looked like a straight forward victory was within sight but then it all went wrong. Matthew Webb had also secured a very advantageous position against Gordon Farrar on board 1. Unfortunately in this game it was the Hebden player who blundered. There still seemed to be some counterplay for Matty but then he uncharacteristically made another error and this time there was no way to fight on. Gordon had started the rot.

Last season Belgrave were the only team to beat the champions in the corresponding fixture. Surely it couldn’t happen again? It didn’t because soon after board 1 had finished Nick Sykes agreed a draw with Les Johnson to ensure the visitors would at least draw the match. That result left Pete Leonard struggling with a disadvantage against Mike Barnett. If Pete held the draw then Hebden would win the match. If he lost then it would be drawn. Pete fought hard but Mike drove home his edge remorselessly and the match was tied.

This result was not good news for Hebden because on Wednesday night the league leaders Huddersfield took full advantage of the slip up by crushing an under strength Todmorden ‘A’ to extend their league lead to 4 points over Hebden and Halifax ‘A’ who squeezed past Todmorden ‘B’ away.

So it was that last Monday night (the 3rd) Hebden Bridge hosted Courier ‘A’ at the Trades Club knowing that it was utterly imperative that they win if they were to retain even the slimmest chance of catching Huddersfield. Things took a turn for the worst on Monday morning when Matty Webb was diverted to London with work. There was no way he could play and so the rest of the team all moved up a board to accommodate Andy Leatherbarrow on board 5. Courier are not the sort of team you’d ideally want to lose your top board against but Hebden had already lost Matty’s services once this season and that was for the equally tricky away match at Todmorden ‘A’ who, though at full strength were beaten 2 — 3. Hebden would once again need strong performances on the lower boards if they were to clinch victory.

In fact the first result of the night was at the top end of the tie where Matthew Parsons played a very powerful game against John Morgan. Matthew left his king in the centre of the board for a very long time and advanced his pawns on the king’s side and in the centre. He got a huge space advantage and lots of pressure but John played resourcefully to maintain material parity. As they entered the end game it appeared initially that John was doing ok but Matthew’s rook, bishop and knight were far more active than John’s two rooks and, with his pieces perfectly coordinated, Matthew drove home his advantage to win a fine game.

Sadly the match was soon level for Dave Shapland was beaten pretty much out of the opening by Robert Clegg on board 3. Playing a line of the French Defence that had been discussed by these two twice before, Robert had prepared a surprise deviation that Dave could not have foreseen or prepared for and although he managed to figure out the key ideas Robert was proposing he couldn’t find the best continuation. The queens came off early and Robert won a pawn. Then Dave over looked a tricky tactic and lost a knight as well. After that Robert smoothly avoided all the traps Dave set up and gradually swatted the counter play to finish Dave off. A very interesting game despite the result for Hebden and well played by Robert.

Next to finsh was board 4 where Nick Sykes drew with Pete Hughes. Nick selected a solid opening line against Pete’s Accellerated Dragon set up and was comfortably able to hold a draw even if he didn’t create any real winning chances either.

Shortly after this Andy Leatherbarrow beat Guy Thompson in a queen and pawn ending to give Hebden control of the tie. Andy maintained a small initiative throug out the game and then played the ending very well despite some time pressure to put his team over the top. Andy has scored 3 out of 3 for the ‘A’ team on board 5 this season.

This just left Pete Leonard and Dave Patrick on board 2. Pete was in the same position as the previous week. Draw to win the match for Hebden. Like the previous week he was in a spot of bother. This time he had a bishop and single pawn against Dave’s knight and two pawns. It looked like White should be able to hold the draw but of course both players were running out of time and anything could happen. In the end Pete did manage to hold and Hebden had sealed another excellent result with a slightly under strength side.

Later that evening even more good news flitered through when it emerged that Huddersfield (ironically fielding probably their strongest line up of the season so far) had been beaten at Halifax and lost on the top 3 boards to go down 3 — 2.

Halifax have, temporarily at least, broken the spell and now suddenly the title race is right back on. Huddersfield are top with Halifax and Hebden two points behind. Todmorden ‘A’ are a further two points back in fourth and Courier are five points behind on 7.

The first fixture of 2013 sees Hebden Bridge travelling to Huddersfield for a match they really need to win if they are to continue to challenge for the title. They’ve risen to the challenge on several occasions already this season. Can they do it again?