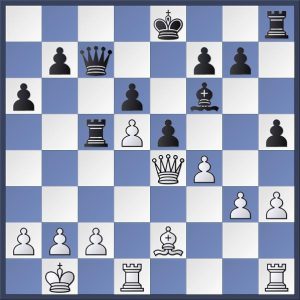 Black to move in Clarkson vs. Sykes. Andrew had just played 20.f4 threatening to open up lines towards Nick’s king. What would you do with Black here? Nick took an unusual but effective approach. Find out what he did in the game viewer at the end of this post.

We’ve two weeks’ worth of action to catch up on in this post and, coincidentally, two matches featuring Hebden Bridge against Huddersfield teams. The aggregate score is proudly displayed in our title but that masks the fact that we won one by a huge margin and lost one by fractions.

First of all, a week last Monday, Hebden Bridge ‘C’ undertook the odyssey of travelling to Holmfirth to take on Huddersfield ‘B’. The hosts are probably the favorites to take the League 2 title having been relegated from League 1 last season, but Hebden Bridge have decent players available to them too and were still more than capable of causing an upset though they were out graded on every board.

It was a brutal match in the end with none of the five boards ending peaceably. The visitors fought well but fell just short of causing a big upset. On board 1 Andy Leatherbarrow was winning against Leo Keely, but lost track of time and didn’t manage to reach the time control.

Meanwhile, Neil Bamford bounced back from losing his first match of the season on board 2 with an excellent win over David Gray. He won a knight in the middle game and tidied up nicely. John Kerrane never really managed to make a mark on Granville Boot on board 3 and Paul Gledhill ‘went for glory’ on board 4 against Simon Anscombe, but his attack didn’t come off and he went down.

On board 5 though, debutant Chris Marsden outplayed his opponent nicely, tripling his heavy pieces on the b-file to dominate the game and not becoming discombobulated when Black tried to mix things up by sacrificing a knight for two pawns.

In the other match in League 2, Belgrave ‘C’ smashed Halifax ‘B’ by 4½ – ½. Dave College was out graded on board 1 against Scott Gornall but managed to hold the draw while the rest of his team-mates all held rating advantages over their opponents and duly dispatched them.

Those results mean that Huddersfield and Belgrave are on a collision course to fight for the top spot when they meet on Monday night whilst Hebden Bridge ‘C’ will hope to avoid sinking to the bottom of the table when they face Halifax away.

Now on to last week’s matches in League 1. Reigning champions and league leaders, Hebden Bridge ‘A’ sat out the round 3 matches and were interested by-standers as they waited to see if any of their rivals could over-haul them at the top.

Like their ‘C’ team colleagues the previous week, Hebden Bridge ‘B’ travelled to Huddersfield on Monday night, although they made a slightly shorter trip to the Lindley Liberal Club. Hebden had pretty much as strong a line up as the one they had sported in the derby match in round 2 with Pete Leonard (un needed by the ‘A’ team) returning to play on board 5 in place of Richard Bedford.

Hebden’s fire power was simply far too much for Huddersfield to handle. Without their top two rated players they were heavily out gunned on the top boards and forced to promote what would have been highly competitive lower board players to fill the gap.

Of course, Huddersfield fought hard and made Hebden work for their victory but Martyn Hamer over came Dave Keddie on board 1 and Phil Cook found a chink in Steve Westmoreland’s armour when the Huddersfield captain tried to block up the position and build a fortress.

On the lower boards, Sam Swain and Pete Leonard played the same opening variation against Richard Boylan and David Booth’s French Defence. However, whereas Pete never really looked like slipping up on board 5, Sam seemed to be in trouble against Richard towards the end of the middle game but managed to turn the tables to enter a rook and pawn ending with an extra pawn. In time trouble, Richard capitulated when he might still have salvaged a draw.

That just left the board 3 match between Andrew Clarkson and Nick Sykes. Predictably this was the heaviest theoretical duel of the night with the players continuing their discussion of the 6.h3 line of the Najdorf. This line is trendy enough that Magnus Carlsen played it in the FIDE Chess.com Grand Swiss earlier this week! Nick has been good enough to annotate the game and send it through for publication – see the game viewer at the end of this post. It seems that Andrew secured an advantage but, with both players in time trouble, he was unable to find the best procedure and a draw was agreed in the last game of the night to finish as Nick secured a sole half point for his team.

Elsewhere, Halifax ‘A’ took full advantage of Hebden Bridge ‘A’s absence to go top of the table by beating Belgrave ‘B’ at Claremount Road. The hosts managed to draw on board 2 and win on board 5 but were otherwise put to the sword with Winston Williams leading the charge on board 1 as he stayed perfect for the season winning his third game.
Also, at the Belgrave Social Club, their ‘A’ team continued to make Brighouse’s return to the top flight a miserable one as they won 4½ – ½. Only Robert Broadbent on board 1 was able to resist.

So, Halifax ‘A’ are top of the table with 6 points from three matches. Belgrave ‘A’ and Hebden Bridge ‘A’ are on 4 points but Hebden have only played two matches. Hebden ‘B’ and Huddersfield ‘A’ have 2 points each (Hebden have also have a match in hand) and Belgrave ‘B’ and Brighouse are bottom.

There are a selection of games from the last two weeks in the game viewer below.