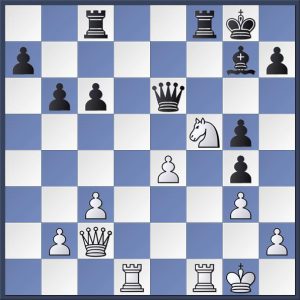 White to play from Velosa vs. Swain (Hebden Bridge ‘A’ vs Halifax ‘A’) Black has grabbed a hot pawn. Can you see how White took advantage to press home the attack? Answer in the game viewer at the end of this post.

Both Calderdale Evening Chess Leagues have now played two rounds of fixtures, so we’ve plenty of action to catch up on in this post.

Let’s catch up on round 2 of League 1 first of all. Most of the fixtures took place on Monday 2nd of October with Golden Lion’s first home fixture against Hebden Bridge ‘B’ postponed until Monday the 9th.

Hebden Bridge ‘A’ took on Halifax ‘A’ at home in their second match of the season. In recent years these two sides have fought out some epic encounters full of twists and turns and almost always very tight indeed. Hebden had the better of things last season but for this fixture both sides sported line ups that looked very different to the corresponding fixture last season.

Hebden Bridge ‘A’ had fielded Messrs Parsons, A.Bak, C.Bak, Shapland and Leonard on the 3rd of April when they edged a tight match 3 – 2. This time out the side was Andy Bak, John Allan, Sam Swain, Neil Suttie and Richard ‘Beaky’ Bedford. Team Captain Pete Leonard was away and stand-in Captain, Nick Sykes, elected to play his strongest five available players which meant no place for him in the line up.

Halifax ‘A’ also had four different players to the April match. Last season they had Winston Williams, Darwin Ursal, John Morgan, Richard Porter and Sam Scurfield. This time out it was Bill Somerset, Richard Porter, Carlos Velosa, David Loughenbury and Barry Wadsworth. With this line up the visitors were out-graded on every board to a greater or lesser extent. On paper it looked it should have been easy for Hebden but it turned out to be anything but.

On Board 1 Andy Bak and Bill Somerset continued their theoretical discussion of the Semi-Slav (this time the Anti-Moscow Variation as opposed to the Botvinnik Variation). This opening lends itself to mind boggling complications and generally both sides make inaccurate moves. On this occasion it was Andy with Black who came out on top.

Board 2 saw Richard Porter play the London System against John Allan. John’s had plenty of practice of playing against this system from his recent games against Matthew Parsons and Richard didn’t play the most ambitious lines. Never the less the game did get pretty complicated. However, with plenty of life still in the position, the players agreed to a draw on move 25.

Halifax struck back on board 3 where Carlos Velosa was up to his old tricks with Bird’s Opening (1.f4). Sam Swain handled the unorthodox opening system perfectly well but Carlos is a dangerous tactician and, when Sam grabbed a hot pawn on move 26, Carlos seized the opportunity and found a pretty forcing sequence (see the puzzle at the top of the post). Sam missed the point and resigned when he saw mate in two coming.

Loughenbury versus Suttie on board 4 was another London System. Here too Black seemed to equalise fairly easily and the game simplified quickly to a double rook, knight and six pawns each endgame. The players decided as early as move 22 that the position was sterile and shook hands. Of course the engine has an opinion of its own and suggests White was better with potential to play against a vulnerable Black a-pawn.

This meant that the match was decided on board 5 where Hebden had the largest rating advantage of any of the encounters. However, Richard Bedford had toiled with the Black pieces to take down Barry Wadsworth in round 2 of last year’s Calderdale Individual Championship so the conclusion was by no means forgone. On this occasion however, Beaky made lighter work of the task when, in the middle game he managed to create and exploit a pin on the d-file. Barry had a fleeting opportunity to release the pin on move 26 when Bc5 or Bd4 (see the game in the viewer at the end of this post) may have enabled him to hang on. But after the game move 26.Re3 and, soon after, the critical mistake 28.h4? he first lost a piece and then his queen with check mate to follow shortly.

Thus did Hebden manage to win a tight match 3 – 2. Bizarrely they have been scheduled to play 6 out of the first 7 matches this season at home (!!) which means they are going to get some practice with the Black pieces and may be able to make a strong surge when the have the reverse fixtures after Christmas.

Here is the final match scorecard against Halifax:

On the same evening Belgrave ‘A’ bounced back from their opening fixture defeat against Golden Lion to thrash Brighouse ½ – 4½. The home side were without their top board Robert Broadbent and this exposed the rest of the squad. Only the Brighouse Captain, Paul Whitehouse, saved a walk over for the visitors when he held John Morgan to a draw on board 2 – a highly creditable outcome considering the rating difference of almost 60 points.

Then, on Wednesday last week, Huddersfield ‘A’ took on Halifax ‘B’ who had surprisingly opened their account by beating their own ‘A’ team in the first fixture. Huddersfield defaulted their third board and Ray Cully held Steve Westmoreland to a draw on board 5 but the other three games went the way of the home side as Huddersfield won 3½ – 1½.

To complete the second round of fixtures, Golden Lion and Hebden Bridge ‘B’ played their match this last Monday, the first at the eponymous venue of the home side. It must be said that not everything went perfectly smoothly (the venue was noisy) but the necessary steps have already been taken to ensure better conditions for future matches and five new visitors to the league turned up for some social chess which was very encouraging.

The match itself swung the way of the home side all too quickly. On board two Hebden’s Andy Leatherbarrow blundered a piece early in the game and, although he battled on for some time after that, the outcome was never in doubt and Andrew Clarkson converted to the full point.

By this time though the match was already in the bag. Dave Shapland beat Neil Bamford on board 3 in the first match to finish as Neil got his pieces into a tangle, gave up the exchange for a pawn to try and sort himself out only to drop a piece to a tactic shortly after.

On board 4 the manner of victory was rather different as Golden Lion’s David Innes ground down Terry Sullivan finally swapping down to a king and pawn ending where he had an extra pawn and a sure win. Terry resigned rather than suffer further.

Finally, on board 5, Golden Lion’s new recruit Peter Dickinson played a complicated draw out against Paul Gledhill. There was plenty of complexity and excitement in this one but in the end the players decided to agree peace terms with the situation at the board still rather unclear.

With the match now decided Hebden’s Nick Sykes was able to offer a draw to Martyn Hamer in the confidence that he was at least no worse and possibly even slightly better against his much higher rated opponent. Certainly Martyn was happy enough to grant the request given that trying for anything more would have involved a good deal of risk and a very long and drawn out evening’s effort to boot.

In round 3 next (matches played tonight) both Hebden Bridge teams will be at home with Hebden Bridge ‘A’ playing Huddersfield ‘A’ and Hebden Bridge ‘B’ hosting Halifax ‘A’. These should be fascinating match ups. Elsewhere Golden Lion host Brighouse and Belgrave ‘A’ will play Halifax ‘B’.

John Kerrane’s (predominantly junior) Hebden Bridge ‘C’ team played their first round match on the 25th of September and their second round match last Monday.

In round 1 they faced Belgrave’s new ‘C’ team outfit. Unfortunately, Hebden were missing one of their youngsters when Martha Leggett had to take an emergency trip to the dentist at the last minute. The largely junior line up was up against it any way as Belgrave fielded an experienced side who were more than a match for the hosts on this occasion.

Then, last week, Hebden fielded a similar line-up against Belgrave’s ‘B’ team (this match was an away fixture but Belgrave had kindly agreed to play it at the Trades Club so that transportation for the juniors was not a difficulty. This time the juniors faced a side that in no small part reflected the line up of the Belgrave ‘A’ team that had participated in League 1 a few years ago. Once again Hebden managed just a single draw and this time it was provided by one of Todmorden’s refugees welcomed into the club to play in League 2 – J.P Ellis who scored a very fine draw with Gordon Farrar on board 1.

Here is the full score card:

All of this means that Hebden ‘C’ are still awaiting their first win of the season. Maybe it will be ‘third time lucky’ as they take on Halifax ‘D’ at the Trades Club this evening (this match is being played a week ahead of schedule).

In League 2, Belgrave ‘C’ and Huddersfield ‘B’ top the table with two wins out of two. Halifax ‘C’ and Belgrave ‘B’ have one win each and Hebden and Halifax ‘D’ are yet to score.

You’ll find a number of recent games in the game viewer below. Our thanks to Nick Sykes for collecting and transcribing the Hebden Bridge games.