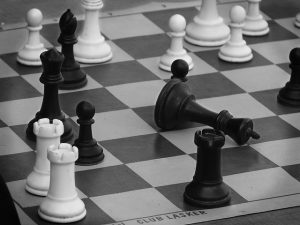 Hebden Bridge ‘A’ had started the season with a couple of wins and now faced stern opposition in the form of Huddersfield ‘A’ who had also started the season in perfect fashion. Usually, matches between Hebden and Huddersfield are super-tense and tight affairs but on this occasion Huddersfield rather cruised to victory by a margin that doesn’t really do justice to the close nature of the games.

Sadly the tone was set by ‘A’ team captain Pete Leonard who fell into an opening trap against Dave Keddie and was compelled to resign in just 10 moves as he was a piece down with no compensation. At least he retained his perspective on the loss and remained sanguine. He has even annotated the game for us in the game viewer at the end of his post. We have indeed, all been there at some point. Your correspondent blundered a mate in one earlier this season.

The night didn’t get much better. John Allan went down to Mitchell Burke on board 1. He seemed to have built himself a decent position and, according to the kibitzers, may even have overlooked some chances to press for victory. But in the end Mitchell found a way to win as he so often does from difficult positions.

Sam Swain and Neil Suttie on boards 3 and 4 also went down against Steve Westmorland and Dave Tooley respectively. Sam never really managed to equalise against Steve’s English Opening and Neil suffered when he initiated sharp play by castling on the opposite wing to Dave but found that White’s attack was fastest.

This just left Richard Bedford to salvage some pride for the home team by despatching Robert Sutcliffe with one of his trade mark off-beat opening lines, the Black Knight’s Tango. It’s a line ‘Beaky’ is an expert in and it showed as Robert struggled to get to grips with it and was defeated.

The final match score card made for grim reading for Hebden:

Across the room Hebden Bridge ‘B’ did rather better but still came up short in a very close match with Halifax ‘A’ who had beeby Hebden ‘A’ in the previous round and by their own ‘B’ team in round 1. They desperately need to get off the mark and they did, but only just.

Top board for the visitors was Bill Somerset and he took on Nick Sykes. This was a highly theoretical and classically set game in a Queen’s Gambit Declined. Nick equalised comfortably and the players agreed to halve the point fairly early in the game which was a great outcome for the home team as Bill is rated 30 points higher than Nick who secured a second draw against very strong opposition in two matches.

There were also draws on board 3, 4 and 5 for Andy Leatherbarrow against Carlos Velosa, John Kerrane against Sam Scurfield and Neil Bamford against David Loughenbury. John and Neil also gave away serious rating differences and Andy and Carlos were rated almost exactly the same. This represented a great battling display by the ‘B’ team.

But unfortunately their night was also due to end in disappointment as the last board to finish saw Richard Porter overcome Martin Syrett in a battle of the captains. Martin gained the exchange but afterwards his position seemed more difficult to play and eventually he felt compelled to give back a bishop to secure a dangerous passed pawn. Richard found a solution to the problems he had been set however and managed to convert his material advantage to a full point to seal Halifax’s first win of the season. 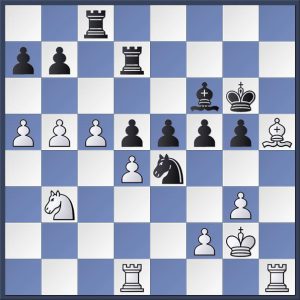 Here’s an arresting position from the game between Robert Broadbent (Brighouse) and Phil Cook (Golden Lion). White has just played 39.Bh5+. Look at the fully-loaded fifth rank! The game ended in a draw and you can see it all in the game viewer at the end of this post.

Elsewhere in League 1, Golden Lion continued their perfect start to the season by demolishing 4-man Brighouse ½ – 4½. The game of the night here was undoubtedly Robert Broadbent and Phil Cook’s draw which was a keenly contested encounter with Robert showing great determination and creativity to press hard for a win only to find that Phil was equal to the task as he just managed to hang on. It was one of those games that looked like White should win but in practice finding the solution was difficult and in the end, with his clock running down, Robert decided he should at least salvage a half-point for his team.

Finally, Belgrave ‘A’ defeated Halifax ‘B’ to stay in contention for the title race. The damage was done here by Dave Patrick and Richard Bowman on board 2 and 3 as they saw off Scott Gornall and Howard Wood. The other games saw the Halifax ‘B’ players make very creditable draws against higher rated opponents to limit the margin of victory to 3½ – 1½.

These results mean that Golden Lion and Huddersfield ‘A’ are now at the top of the league with 6 points. Hebden Bridge ‘A’ and Belgrave ‘A’ have 4, Halifax ‘A’ and Halifax ‘B’ have 2 and Brighouse and Hebden Bridge ‘B’ are still on 0.
I mentioned at the beginning of the article that Hebden Bridge ‘C’ also played a match at the Trades Club. This was scheduled a week early to allow John Kerrane to organise the junior squad before going away on holiday this week. Halifax ‘D’ are, on paper, the team that the juniors should have in their sights as potential victims and indeed they did fair better than they had in their first two matches although they still went down in the end.

On board 1 the token ‘non-junior’, J.P. Ellis held Glen Roper to a draw while on board 2, Toby Dodd scored the ‘C’ team’s first board win of the season by defeating John Nicholson. Luca Curry, Martha Leggett and Alfie Dermo were all defeated. Here is the match scorecard:

The other two matches in League 2 were played on Monday this week and saw Belgrave ‘B’ defeat Belgrave ‘C’ by 3½ – 1½ and Huddersfield ‘B’ thrashed Halifax ‘C’ 4 – 1 with a result that sees them go top of the league on their own as the only side with a perfect record. They are followed by Belgrave ‘B’ and Belgrave ‘C’ who both have 4 points, Halifax ‘C’ and Halifax ‘D’ who both have 2 points, and, at the bottom, Hebden ‘D’ who have at least managed to win their first game of the season. Maybe that will inspire the youngsters to greater heights and more rewards for their efforts.

You’ll find a good number of the games from last week in the game viewer below. Thanks to Nick Sykes for collecting and transcribing these for this report.