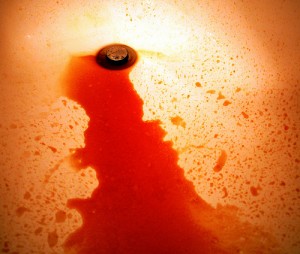 After a gruelling contest a relaxing soak would have been just the ticket but it was bedtime! (Image from *Kicki*'s Flickr photostream)

It isn’t all that often that all games in a five board match end decisively. Yet that is just what happened in Brighouse on Monday night as Hebden Bridge ‘A’ fought with their title rivals and scrambled to victory by the narrowest possible margin.

To coin a footballing phrase that has caught on in recent times, this round of fixtures could have been promoted as “Super Monday” as the top four teams in the division all played each other. Todmorden ‘A’ travelled to Halifax to take on the current leaders Courier ‘A’ whilst Brighouse and Hebden did battle. The results of these fixtures leave the title race poised to be an absolute thriller this year.

But, I’m getting ahead of myself. The match at Brighouse started as it ended, with highly graded players overlooking mate in one threats! Two in one match is most unusual. Hebden’s captain, Dave Shapland, started the night off in nightmare fashion when he completely missed a simple checkmate threat on move 20 against Dennis Breen. At the time his position looked promising so it was a particularly profligate moment. Dave’s despondency was compounded by the fact that the game was all over before 9.30 meaning that he then had over an hour’s wait to fret over the outcome of the match without having a game of his own to divert his attention.

Fortunately for Dave the worst of his soul-searching was short-lived for, on board 3, Pete Leonard made short of Brighouse’s Bruce Bendall in smooth and efficient fashion. Hebden did not stay level for long however. On board 5 Dominic Gallagher had been pressed into action at short notice in the absence of Dave Sugden. He battled bravely against Ron Grandage and almost pulled off a draw in a rook and pawn ending having been tortured for the whole game. Sadly his tenactity went unrewarded when he made an inaccurate move and Ron put him away. 2-1 to Brighouse and now things looked grim.

Fortunately for Captain Shapland the remaining two boards were manned by two of his most reliable performers so far this season. On board 4 Nick Sykes won the exchange for a pawn against Paul Whitehouse and converted the advantage calmly and without too much fuss. Nick lost in his first match of the season, but since then he has been on the rampage dropping just a half point in the following five games.

On board 1 Darwin Ursal had succeeded in winning a pawn from Robert Broadbent and looked in a good position to convert his advantage. However, anyone who has played Robert will know him to be a tenacious and stubborn defender and he wriggled and made life difficult for Darwin who started to eat up time on his clock after the control had been reached. Finally, Darwin forced a break through and, as Robert desperately sought counter play he stepped into a mating net and was snared. It was the only time Hebden had been in the lead that night.

Up the road in Halifax League 1 leaders Courier ‘A’ were being overturned by Todmoden ‘A’ and relinquished sole ownership of top spot in the process. Courier are still top on board count but Todmorden and Hebden now have the same number of points (9) as them. Brighouse are two behind on 7 and Huddersfield ‘A’ can catch them if they win against their own ‘B’ team on Thursday evening (that result is still to be posted). If that happens then there will be five teams within two points of each other.

Hebden Bridge ‘A’ can draw some strength from the fact that they have travelled to Todmorden, Huddersfield and Brighouse in this half of the season and they are now the only unbeaten side in the league despite being without some key players for more than half of the fixtures so far.

Hebden Bridge ‘B’ were also playing in Halifax on Monday. Their match was against Belgrave who were, somewhat surprisingly, bottom of the league before the match. A win for Hebden would have carried them a further 2 points clear of the drop zone. Sadly, they had a collective off day and Captain Martin Syrett said that…

By 9.55 me, Andy (Leatherbarrow), Neil (Bamford) and Steve (Priest) all stood huddled in a group looking at a score sheet that read 4 — 0 to Belgrave!… A bizarre night really. As far as I can see, all four of us decided to put our lemming heads on and play suicidally bad lines to get it all over with quickly.

Only Josh Blinkhorn on board 3 managed to salvage some scraps from the wreckage by winning against Mike Barnett.

This result means that the ‘B’s have now slipped into the drop zone for the first time since the first match of the season although they are only one point behind Belgrave. Their next match is against Brighouse at home and one suspects that they must perform very well on the lower boards to have any chance of getting a result from that match.

The game viewer below has a selection of ‘A’ team games as well as some ‘C’ and ‘D’ team games from last week that have reached me this week.