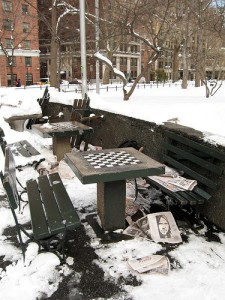 “Sac’d a piece, but it’s bulls#*t.
Will he see, no he’s missed it.
A beautiful sight,
I’m happy tonight,
Playing in a winter blunderland”
– To the tune of “Winter Wonderland”

As we get closer to Christmas so the posts on this blog will become progressively, cheesily and unapologetically more festive! Last week I launched our Christmas quiz which has been kindly sponsored by www.chesssets.co.uk/. If you haven’t seen it yet, go take a look. I have extended the deadline for entries to New Year’s eve in order to give you the chance to mull the positions over after your turkey and sprouts!

It felt about time to take a break from all the match reports that have been flowing thick and fast so, today’s entry is all about blunders! This chess playing season has been a strange experience for me so far. At least half a dozen games that I’ve played against opposition that has been at least as strong as me have ended with the kind of terminal errors that you would expect to see on the lower boards of a juniors match and not the upper boards of a club match.

I can’t fathom why this might be the case. For my part I’ve been very busy and pretty stressed at work and my captaincy of the Hebden Bridge ‘A’ team has also been an unhelpful distraction from my own playing form at times. However, even taking these things into account I’ve made some pretty crass oversights.

What is even more surprising however, is the number of howlers that have been committed by my opponents. Many more than I’d have expected to be the grateful recipient of in recent years playing at my current level. One consequence of all this generosity is that I have, very often, been the first game to finish in my matches. Years ago, when I used to play fast and loose, this was not an unusual occurrence, but in recent times it has been a much less frequent event.

Here, for your entertainment, and my embarrassment, is a rogues gallery from the last 3 months.

To give you a rough idea of how unusual this selection is, I’d normally expect maybe one or two games to end in this kind of way in a whole season. Yet, here are half a dozen before the halfway mark!

All this talk of blunders sent me scurrying off to my new resource for chess related anecdotes and miscellanea, Christian Hesse’s book “The Joys of Chess: Heroes, Battles and Brilliancies”. The chapter entitled “The Worst of the Worst” seemed a good place to look for terrible mistakes! Below are the two examples he gives which should provide all those blunder prone readers of this website with some source of encouragement in that:

“The best of men have their faults, and the wisest suffer from occasion from a passing blindness”
— Christoph Martin Wieland (1733-1813)

In other words, if the Grandmasters can make blunders, anyone can!