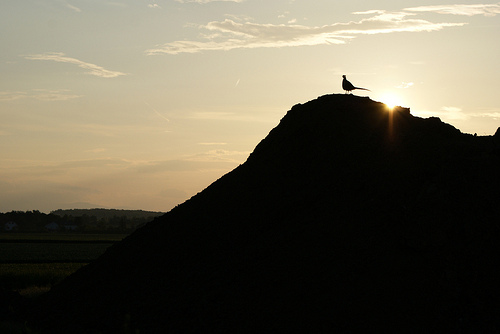 Hebden 'A' are top of the heap and remain unbeaten - just! This wonderul photo is from Da Beez's Flickr photostream

During the struggle
They will pull us down
But please, please
Let’s use this chance
To turn things around
And tonight
We can truly say
Together we’re invincible”
(Muse – Invincible)

On Monday night Hebden Bridge ‘A’ cleared another big hurdle on the road to what looks increasingly likely to be the road to the Calderdale League 1 title. They scrapped their way to draw against last year’s champions, Huddersfield ‘A’ as the Trades Club played host to the second Hebden vs. Huddersfield double header of the season with the two ‘B’ teams also squared up.

At the start of the night Hebden ‘A’ looked down on their nearest rivals from the vantage of a 4-point lead but they knew that the Champions (one of two teams occupying second spot) would be gunning for them and would bring a ferociously strong side in a final bid to retain their title. Nothing less than a win would do for Huddersfield which is why it was somewhat surprising that two of their contingent agreed relatively quick draws in positions that still seemed to have plenty of play in them.

On board 1 Huddersfield’s Mitchell Burke is beginning to develop a reputation for being an advocate of the good old fashioned “Grandmaster” draw as he and Matthew Parsons banged out 15-odd moves of theory in the London System and then agreed terms shortly after the first new moves. Matthew was about to gain a pawn in a Benko-type position which offered Mitchell some activity in compensation. It seemed however that Mitchell didn’t have complete confidence in his set-up for he offered a draw and Matthew knowing he would have to play very accurately to convert his material advantage and not without risk, decided to accept.

It wasn’t too much later in the evening when board 3 also finished. Here Hebden’s “The-Man-Who-Drew-With-Mikhail-Tal”, a.k.a Pete Leonard, also drew with Huddersfield’s David Firth. Pete had deployed a new system for him against David’s French Defence. However, it didn’t turn out quite as he’d planned and David seemed to have a decent space advantage. Never-the-less once all the heavy pieces had been traded on the open c-file it looked like the extra space would be difficult to convert into a full point and David wasted no unnecessary energy trying to do so. Pete had absolutely no winning chances and so accepting the draw offer was perfectly understandable.

Subsequent events seemed to completely justify the early Huddersfield draw offers as Dave Tooley beat Dave Shapland on board 4 to put the visitors in front. Shapland spent far too long in the opening trying to find the best way to meet his opponent’s unusual Scandinavian variant and, although he obtained a perfectly acceptable Panov-Botvinnik type position, he started to play more and more loosely as he began to run short of time. A progressively serious string of inaccuracies were followed by the blundering of a rook and Shapland resigned before he lost on time.

It now looked like a very tight spot but Hebden have been in tight spots before this season and it seems to galvanise them into iron-willed intransigence. As the crisis loomed Nick Sykes seemed to be about to calm the storm as it appeared he was overrunning Tony Aguirre’s position. There had to be a win there somewhere (and as you’ll see in the game in the viewer below, there were several!) but, amidst all the complexity, Nick couldn’t find it and Tony hit him hard on the counter attack.

What happened next was most unusual. With zeintot at it’s most acute and the players totally focused on the board, Nick suddenly pointed out that both flags had dropped! Neither player had reached time control. What should happen next? A couple of amused bystanders observed that Nick’s flag had dropped first but Tony had either not seen it or sportingly chosen to overlook it until his flag had also fallen. After a brief discussion the players agreed to keep playing and the clocks were turned back 15 minutes.

At this point Tony seemed to have obtained a decisive advantage. He had two bishops and a rook against two rooks with a handful of pawns each. Victory for Huddersfield seemed inevitable but Nick fought valiantly to scrounge a draw. First of all he won a pawn and exchanged off a pair of rooks and then he managed to manouevre his last rook and king into a position where they could trade off Tony’s last pawn on f2 and one of his bishops leaving him with insufficient material to checkmate Nick. The too shook hands to confirm it was a draw and Hebden had once again escaped defeat by the narrowest of margins.

There was still work to be done however. Hebden were still a point down and there was just one board left in play. Fortunately Hebden’s stand out player of the season, Darwin Ursal, was at the controls. His captain has started to call him “Drawin” because those are the only two results on his record in Calderdale this season — and there haven’t been many draws!

Darwin was facing Huddersfield’s Dave Keddie and early on in the game Black seemed to have gained at least equality if not a bit more. However, as has been the case on so many occasions this year, Darwin stabilized the situation and then took the initiative. By the time Nick and Tony’s game had finished he had a couple of pawns advantage in a complicated minor piece ending. Dave did everything he could to create complications but Darwin snuffed out any counter-chances mercilessly and started to hoover up the rest of Dave’s pawns.

In the end it was futile to resist the inevitable and Dave resigned handing Darwin another win and Hebden Bridge a draw which may very well be decisive in the final league standings. Darwin and Nick had been the heroes this time round but all members of the team have produced critical results for the team at one time or another and there is a strong spirit and determination about them. Can they finish the season unbeaten?

The ‘A’ team’s draw gave some of the other title chasers a rare opportunity to narrow the gap and both Todmorden ‘A’ and Courier ‘A’ took full advantage. Todmorden beat Belgrave 3½ – 1½ at home and Courier beat Brighouse by the same margin, helped thought they were by Brighouse dropping two defaults.

The last match of the round was the bottom of the table clash between Hebden Bridge ‘B’ and Huddersfield ‘B’. In the previous round of fixtures Huddersfield had hauled themselves level with their fellow relegation prospects by gleaning a draw with Brighouse. Both teams started the night with just 3 points and, with Belgrave the closest side to them in the table, on 9, it seemed unlikely that either side could get themselves out of trouble. As it was, Hebden ‘B’ kept their slim hopes alive with a resounding win.

Huddersfield ‘B’ were stronger than they had been for the reverse fixture before Christmas, but Hebden’s home advantage was put to good use as Andy Leatherbarrow, Martin Syrett, Dave Sugden and Neil Bamford beat Robert Sutcliffe, Stuart Oliver, Chris Stratford and Dave Tyfa respectively. On board 4 John Kerrane took the opportunity to staunch the flow of adverse results he has been struggling with by cruising to a straightforward draw with Brian Corner. Congratulations to Martin Syrett and his team on their first victory of the season. The result means that Hebden can still dream of catching Belgrave but they’ll need to beat both Belgrave and Brighouse in their last two fixtures and hope Belgrave get beaten in their remaining fixtures as well.

All 10 of the games from Monday night can be played through or downloaded form the game viewer below. I’ve also added in 3 stray games from the previous week’s match between Courier ‘B’ and Hebden Bridge ‘C’. If you are interested in taking a look at the league tables then you can go to the “Calderdale League 2011-12” page link at the top of the page.