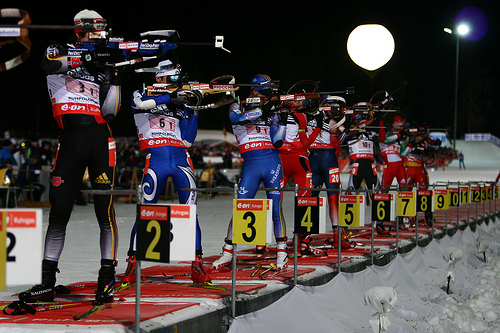 In Biathlon the psychological pressure of being in the lead means that the first athlete into the range is often not the first to leave it. A simliar effect seems to be gripping successive leaders in Calderdale League 1. This image is used under the terms of Creative Commons and sourced from Chiemgau’s Flickr photo stream

First of all let me wish all Hebden Bridge Chess Club members and our readers a happy, prosperous and check-mate filled New Year! I make no apologies for leaving these web pages untouched over the festive period but we will make up for lost time with some match reports from the last couple of weeks before Christmas.

Seeing as we’ve begun with a seasonal theme I will continue by confessing that I have, during the course of the last three years, become a devoted fan of the winter sport of Biathlon. This is perhaps not the most glamorous or exciting of the sports that will feature in February’s Winter Olympics (which happen to be rather more enticing to me than their summer equivalent) but for me it’s enthralling and is an easy sport to get your head around. The event combines both cross country skiing and rifle-shooting and I’m always captivated by the resilience, skill and nerve of the contestants who display both incredible levels of physical fitness andalso phenomenal self-control as they transition from one discipline to the other.

“What’s this got to do with chess?” You may justifiably cry. I’ve compared our game to tennis, golf, football and cricket on these pages before but surely this is stretching it a bit far. The parallel with chess is that psychological pressure and mental strength play a huge role in biathlon. The commentators often focus on the pressure the leader of the race is under when they ski onto the shooting range for every shot they miss they incur a time penalty and so the stakes involved with shooting perfectly to maintain their lead increase as the end of the race draws closer. Very often the first contestant into the shooting range is not the first to leave as the tension and pressure they experience leads to them slow their rate of fire or miss targets whilst their pursuers, with less to lose, shoot perfectly and catch them up or even over take them. This is part of what lends biathlon it’s fascination for me as the lead can change over and over again and the winner is not only the strongest contestant physically but also the strongest psychologically.

So here’s the real point. It appears to me that this year’s League 1 title race seems to be exerting the same kind of pressure on the league leaders in each round. No team seems capable of holding onto the top spot for very long. Witness this string of results: at the start of round 4 Todmorden ‘A’ were top of the league but they then lost to Hebden Bridge ‘A’; at the start of round 5 Halifax ‘A’ and Huddersfield were top but they both lost to Hebden Bridge ‘A’ and Brighouse repectively to lose their position; as round 6 was being played Hebden Bridge themselves were top with Todmorden and they lost to Huddersfield. As we’ll see, the leaders slipped up again in round 7 and allowed a rival to take the top spot.

Not all of the final matches of 2013 were played on their scheduled date of the 23rd of December. The reason for this was that, not wanting to field potentially weakened line-ups on the 23rd (why do we have a fixture in the calendar two days before Christmas Mr Fixture Secretary?) some teams arranged to play their round 7 matches a week early.

Huddersfield and Todmorden ‘A’ were always going to have to play their match the week before Christmas because Huddersfield were scheduled to host the match and they do so on a Wednesday. Even the most enthusiastic of club players would hesitate to volunteer for a Christmas Day fixture! And so it was that the top two teams in League 1 convened at Huddersfield on the 16th to decide who would be top of the heap at the half-way stage of the season. Todmorden had a one point lead over their rivals at the start of the evening and they brought with them a ferocious line-up of players that included their regulars of Hamer, Mulleady, Clarkson and Tokeley as well as their some-time ‘B’ team top board player Andy Jacques. This side averaged 169 in the YCA live rating list.

Huddersfield meanwhile were even stronger! Mitchell Burke led the line-up on board one and the three Dave’s: Keddie, Firth and Tooley have all appeared at least once each thus far. The surprise package arranged by a benevolent Robert Sutcliffe (cast in the role of Santa for this Christmas tail!) was the return of Leo Keeley on board 2. This meant Huddersfield had an average live rating of 171! Surely then, this must have been the match with the highest average rating ever in the Calderdale League. I certainly can’t remember another and others who have been involved in the Calderdale League much longer than I can’t either.

The match might have turned Todmorden’s way early in the evening as Dave Keddie didn’t appear to play against Andy Jacques on board 3 until 25 minutes had disappeared form his clock. He never the less played swiftly and secured a draw against Andy’s Caro-Kann. The board one game between Burke and Hamer was also drawn and that left Andrew Clarkson on board 4 to put the visitors ahead with a (no surprises here!) complicated win in a highly theoretical Grunfeld Defence against David Firth.

All that remained was for Todmorden to hang on in two equal (or even slightly better) positions on boards 2 and 5 and they could secure a 3 point advantage over Huddersfield for the second half of he season. However, they faltered at the last. Both Rob Tokeley and Pete Mulleady let their games slip away and Keeley and Tooley wrapped up another Chirstmas gift for the home side as they went top by a point over Todmorden, a result that keeps the championship battle on the boil.

All of this meant that Hebden Bridge ‘A’ could close the gap between themselves and the top spot to a single point if they beat Todmorden ‘B’ away. They fielded their regular line up but realised they would have a hard fight to succeed when they saw that Todmorden had replaced Andy Jacques with Neil Suttie and that Tod ‘A’ captain, Alastair Wright, was playing for the ‘B’ team on board 2. The Tod line up was completed by David Innes, Mike Huett and Rob Collier, all good players capable of beating their opponents.

Once again the result turned on the smallest of details. Alastair Wright tore through Pete Leonard on board 2 to put the home side in front. Then the board three match came to an end in a draw (though immediately after the game had finished Nick Sykes spotted a thematic and elementary winning method that he overlooked at the death) before Dave Shapland levelled the scores by outlasting Rob Collier in a tense and complicated struggle in the Budapest Gambit.

At this point it looked like Hebden might sneak it for Andy Leatherbarrow was also winning on board 4 and, though he was a couple of pawns down, Matthew Parsons looked like he had some drawing chances against Neil. As it happened Andy did succeed in defeating Mike but, despite trying absolutely everything he could think of to slow Neil up and keep him thinking in a time scramble, Matthew eventually had to admit that he was beaten. Neil played the ending very accurately to salvage a draw for his team.

This result meant that Hebden passed up on the chance to close to within a point of the leaders but they did at least pull a point back on Todmorden.

The other two League 1 matches were played on the 23rd as originally scheduled. Hebden Bridge ‘B’ have had a torrid season thus far and look like relegation fodder but they gave themselves hope of surviving to enjoy another season in the top flight by winning against a four-man Brighouse side.

Unfortunately their ‘A’ team’s failure to defeat Tod ‘B’ did Martin Syrett’s men no favours as they remain 3 points behind Tod and will probably need to beat both them and Brighouse in the second half of the season to have any chance of getting out of the bottom two places. Who knows, perhaps they can spring a surprise in the derby match next Monday?

That just leaves one match to report on between Halifax ‘A’ and Courier ‘A’ in another fixture played on December the 23rd. Halifax had suffered two painful defeats in a row first to Hebden Bridge ‘A’ and then to Todmorden ‘A’ and this left them languishing back in fifth position in the league. They really had to win to sustain any sort of title challenge. Courier themselves were still very much in contention too. On the night Courier were on the end of a furious Halifax backlash as the visitors were dismantled 4 – 1 with home wins for Winston Williams, Bill Somerset, Darwin Ursal and Sam Scurfield against Courier’s Tony Slinger, John Morgan, Dave Patrick and Robert Clegg respectively. Only Dave Colledge on board 5 managed to keep a modicum of respectibility for Courier by beating Carlos Velosa to save a whitewash.

So, at the halfway stage of the season there are just three points seperating the top five sides in League 1. Hudderfield have 11 points, Todmorden ‘A’ have 10, Halifax ‘A’ and Hebden Bridge ‘A’ each have 9) with Halifax’s extra board point and a half meaning that they are currently ranked third) and Courier are on 8 and still in touch with the leaders. At the bottom, Todmorden ‘B’ gave themselves a great chance of surviving this season by drawing with Hebden ‘A’ as they now have 5 points whilst Brighouse and Hebden ‘B’ have it all to do on 2 points a-piece.

The list of top players in the division is headed by (guess who?) Darwin “Draw-Win” Ursal on a huge 6½/7. He is followed by Todmorden’s Andrew Clarkson on 5½/7 and then comes Hebden Bridge’s Dave Shapland on 5/6. Can either of these two overhaul Mr Ursal? He’ll need to play some more games on board 1 for that to happen I suspect.

Looking ahead to the second half of the season it would appear that there are several factors that might have an impact on who the title winners might turn out to be. For what it’s worth here is my assessment of the top 5’s chances:

I think my money’s on Huddersfield.

What do readers make of this analysis I wonder? As always, please feel free to comment and give your opinion.