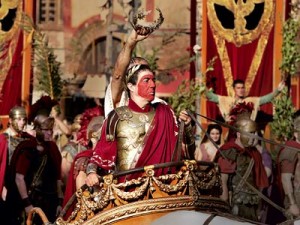 Hebden 'A' were red-faced for a different reason on Monday night!

It is without shame that I begin this post with a hefty chunk of text originally drafted for another article on this site just over two years ago: “Memento Mori” (10th of March, 2010). Back then this blog was more of a personal diary than a club website but the events of this week gave me good reason to recall those two latin words.

Over the last few months I’ve been reminded of this lesson from antiquity on several occasions as I’ve seen and experienced life at the chess board deliver some reality checks (no pun intended!) When you are on a good run of form, whether this be at chess, or in any competitive situation, it is easy to get overconfident and start to feel like a Roman General enjoying his moment in the spotlight. Victories are easy to come by, your luck is in and you feel unstoppable. It is at this moment that the game tends to hand you a timely reminder that all good things must come to an end.”

Hebden Bridge ‘A’ have been on an excellent run of form this season. Before Monday’s match at Belgrave they were unbeaten and 3 points clear at the top of League 1 They seemed to have hurdled the most serious barriers between them and the title. However, if they were feeling complacent and comfortable then their opponents on Monday played, most effectively, the part of  the whispering chariot passenger to their Roman General and reminded them that they aren’t champions yet. 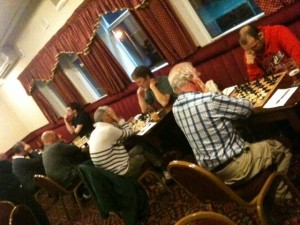 Dave Shapland’s men ultimately went down in flames despite getting off to an excellent start when Matthew Parsons won nicely against Malcolm Corbett on board 2. Matthew is fast becoming an expert on his preferred “Sniper” system and although Malcolm won a pawn his pieces were uncoordinated and one oversight was all it took for Matthew to secure the win.

Next to finish was Darwin “Draw-Win” Ursal who’s inspirational form this season and rapidly rising live grade  totally justified his promotion to board 1. However, he was perhaps surprised by Gordon Farrar’s cunning deployment of the Classical Variation against his Sicilian Dragon and, although the opening went well enough for him, he then made a few uncharacteristic errors to hand his opponent a pawn’s advantage. As usual when faced with adversity, Darwin knuckled down and found a way to acheive a draw but, by his high standards, it wasn’t one of his best efforts.

A draw on top board is not an unusual outcome. Matches in the Calderdale League are usually decided on the lower boards and this was where it all started to go wrong for Hebden Bridge. First of all Pete Leonard blundered whilst in full control of proceedings against Mike Barnett and was quickly and clinically punished for his sins – he was right to point out afterwards that this was probably a just outcome baring in mind his win against the same opponent in the reverse fixture was obtained in very similar fashion.

Shortly after this Dave Shapland also succumbed of a sudden to Richard Bowman who has been a new and very useful addition to the Belgrave line up in the last few matches. The position seemed to be about equal until Dave tried, over-optimistically, to play for a win, underestimated his opponents attacking potential and resigned in the face of a mating attack.

That left poor old Nick Sykes to try and rescue his team yet again. He has managed to do so on several occasions this season – at home to Hebden Bridge ‘B’, away at Brighouse and at home to Huddersfield ‘A’ all spring readily to mind. This time he had to win to secure a draw and, as the rest of the players gathered around his game against Les Johnson, all seemed well. In a double rook and pawn ending Nick had two extra pawns. Rook endings are never easy however and the clock was not on Nick’s side. In his haste he overlooked a couple of winning opportunities and was ultimately forced to offer his opponent a draw as both men had only moments left on their clocks.

Belgrave are to be congratulated on their excellent play and result. They have thrown a title race that seemed decided wide-open once again. Here is the full match score card:

Of course such a traumatising defeat resulted in some self-flagellation by the losers in the aftermath. However, now that some water has passed under the bridge, the ‘A’ team players should reflect that they have done exceptionally well to have got as far as they did through the season without losing when all the other teams in the league have lost at least three times. They now need to show the same fighting spirit that has taken them to the top of the table in order to finish the job off against Brighouse at home on Monday and then away to Courier ‘A’ on the last day of the season. They now once again have a baying pack of hounds at their heels in the form of : Todmorden ‘A’ who closed the gap at the top to a single point by dispatching  Brighouse away 1 – 4; Courier ‘A’ who now lie 2 points off the leaders having beaten Huddersfield ‘B’ by the same score; and Huddersfield ‘A’ who won 4½ – ½ at home against Hebden Bridge ‘B’ on Thursday night.

Sadly, the ‘A’ team’s slip up combined with the ‘B’ teams defeat means that Hebden Bridge ‘B’ will be relegated at the end of the season. I’ll amend this post with their scorecard once it is available to me. In the meantime here are the ‘A’ team games against Belgrave.

One Response to “Look Behind You!”