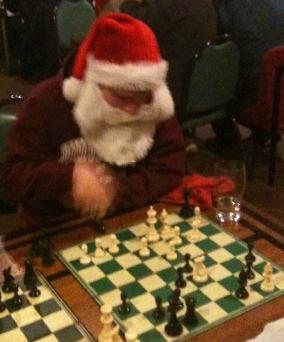 It’s high time readers had an update on the progress of our League 2 teams. While all the excitement in League 1 has been continuing unabated (more on this tomorrow!) Hebden Bridge ‘C’ have been going about their business in a most efficient manor. They lie in second spot behind Todmorden ‘B’ and, whilst they may not catch up with the leaders, they still have a chance to gain promotion by finishing second. To succeed they must hold off a strenuous competitive effort from Halifax ‘A’ who are themselves desperate to get back into the top flight. Last Monday the two sides met (at Halifax although it was a Hebden Bridge home fixture) with Hebden holding a just a single point’s advantage over their rivals. ‘C’ team Captain, John Kerrane, reports for us:

Hebden Bridge ‘C’ set off for a tough match against Halifax ‘A’ last Monday night. Heavily outgraded on all boards, the ‘C’ team players expected a difficult match, and by the end of the opening, they were in trouble on all five boards. However, Dan Crampton and Ray Deravairere on boards 4 and 5 fought back to snatch win, and when Steve Priest secured a draw on board 2 in the last game to finish, they were relieved to find that they had drawn the match 2½-2½. The result means that Hebden Bridge ‘C’ is still in contention at the top of the second division, while promotion is by no means certain for Halifax ‘A’.”

This was a truly inspiring result from John’s team especially from Danny and Ray on the two bottom boards. Ray has only just started playing for the club and only recently learned how to record the moves so a win against a seasoned campaigner like Adrian Dawson is really very creditable. Sadly, I only have John’s game from the top board of this match but, despite his loss, John played well and held out well into the endgame against a player rated over 180! This game is in the viewer at the foot of this post.

All of these heroics meant that when Todmorden ‘C’ came to visit Hebden Bridge this last Monday night confidence was high. Our ‘B’ and ‘C’ teams have really struggled to fill their line-ups on occasion this season and John was forced to field two different players on boards 4 and 5 for this match. Interestingly he selected brother and sister combination Robert and Robina Murray, both very promising juniors. Here is his report from Monday’s match:

On Monday evening, Hebden Bridge ‘C’ took on Todmorden ‘C’ at the Trades Club, Holme Street, and managed to extend their recent run of good form with a 4-1 victory.

The foundations of the result were laid by the team’s two young players, brother and sister Robert and Robina Murray on boards 4 and 5, with two early and emphatic wins. When Steve Priest seized on a mistake by his opponent to win his queen, the match was decided, and finished when Todmorden’s capain, Dave Milton, resigned in a difficult position and desperate time trouble.”

The game viewer below contains both of the Murray siblings’ victories as well as John Kerrane’s nice win against Dave Milton. Robina’s effort was particularly interesting as she exchanged her queen for excellent positional and material compensation before propelling her passed b-pawn over the line to finish the job.

The ‘C’s re-scheduled fixture against Halifax ‘A’ will take place on April the 30th and that is likely to decide who goes up with Todmorden ‘B’ who surely can’t be denied at this stage. It should be a fascinating and tense finale.