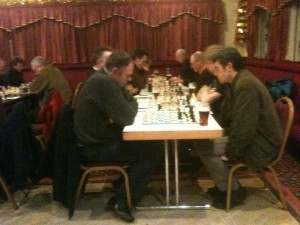 On Monday night the second round of the 2011-12 Calderdale Individual Chess Championship took place at the Claremount Club in Halifax. As always, Hebden Bridge Chess Club was very well represented there are 12 Hebden players in a field of 28) and the games turned up some very interesting fayre.

This year’s competition includes some of the Calderdale Chess League’s true heavyweights at the top end of its seeding list. Headed by reigning Champion, John Morgan, who weighs with a grade of 173, the field contains no less than 7 players graded at over 150 and a further 11 graded over 130. This should mean that the later rounds will become very interesting indeed as the best players get drawn to face one another. Such a strong field can give the early rounds of a competition bereft of upsets as the better players dominate their lower ranked opponents but there was one surprise result in round 1 and in round 2 the big boys certainly didn’t have everything their own way despite coming out on top.

John Morgan was drawn to play against Hebden’s intrepid ‘B’ team captain, Martin Syrett. On paper the game should have been straightforward for the champ but Martin played very solid and sensible chess to maintain material parity late into the night. In the end John only stole the victory be calculating that he could swap the queens off at the end of the middle game to leave himself with a won king and pawn ending that a less experienced and skilled campaigner would have thought to be a dead draw. Apparently, so did Martin, for he offered the exchange only to encounter flawless technique and unerring accuracy from John. Martin can take great credit for ensuring that the board 1 game was the last of the night to finish.

Second seed, Mitchell Burke of Huddersfield, found himself drawn to play his own team captain, Robert Sutcliffe, with the Black pieces. This game was also very tight for a long period as Robert closed the position down and stifled all Mitchell’s attempts at activity. Finally, Mitchell did find a break through and, as is so often the case in this type of game, that single point of entry lead to a swift avalanche which swept Robert’s position away.

Further down the board order were Hebden Bridge ‘A’s top three players. Darwin Ursal swept aside club colleague, Terry Sullivan, in convincing fashion. Dave Shapland completed his victory in the battle of the “Dave’s” (he beat Dave Milton in round 1) when he beat Dave Sugden having offered him the chance to play a variation of the French Defence that both players were well versed in. This game was probably the most theoretical of the evening in that it only left previous practice at Black’s 19th move although the key strategic and positional themes of the opening were evident from start to finish. Hebden ‘A’s board 3 is Pete Leonard. He had a walkover when Matt Levy didn’t arrive to operate the Black pieces. This outcome is never very satisfactory. The remaining players graded over 150 also scored the full point. Robert Clegg won, with another French Defence, against Adrian Dawson; and Peter Hughes beat Hebden Bridge ‘C’s Neil Bamford in a tricky endgame after winning the exchange.

The most interesting and closely contested game of the night was certainly the one between two more Hebden players, Nick Sykes and Andy Leatherbarrow. These two are rated at almost the exact same playing strength and the resultant closely fought contest was no surprise. Nick deployed the Nimzo-Larsen system (1.b3) but, although he obtained a reasonable position from the opening, he never really managed to put Andy under the kind of pressure he might have liked and slowly his situation deteriorated. Andy played well to continue growing his advantage without allowing Nick back into the game and duly converted the full point. This is Nick’s first loss in this competition for 7 rounds, a significant achievement.

Joining Andy Leatherbarrow on 1½ points was Halifax’s John Aldridge who overcame Hebden’s Steve Priest. Unfortunately this is the only round 2 game that is not available to view in the list below.

Round 3 takes place on the 9th of January and there are no fewer than 7 players on a perfect score of 2/2 and another 2 on 1½. Baring in mind all of the top seeds are in this group there should be some very exciting and enjoyable action in round 3.

All that is left for me to say is that you can find full results and games for download on the Calderdale Individual Championship page and that you should enter our Christmas quiz if you haven’t already. The prize is a beautiful mahogany chess set worth £80. Closing date for entries is the 31st of December.